The Volkswagen Taos will slot under the Tiguan, and is the second proof point of Volkswagen’s doubling-up SUV strategy following the launch of Atlas Cross Sport earlier this year.
By : HT Auto Desk
| Updated on: 19 Sep 2020, 08:19 AM 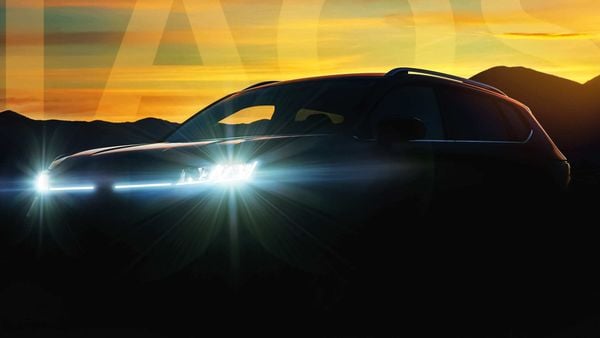 Volkswagen has teased a new sub-compact SUV Taos ahead of global unveiling on October 13.

Volkswagen has teased a new sub-compact SUV that is scheduled to be unveiled next month. The carmaker announced the name for its new compact SUV - the Volkswagen Taos. The Taos model was designed specifically for the North American region and, as such, the name was chosen to resonate with American customers.

“We’re thrilled to announce the name for the newest member of the Volkswagen family," said Hein Schafer, Senior Vice President for Product Marketing and Strategy, Volkswagen of America. “It was important to choose a name that really embodied the nature of the car and the town of Taos, New Mexico was a perfect fit. It’s a small city that offers big things—from outdoor adventure to arts and design and great cuisine."

The Volkswagen Taos will slot under the Tiguan, and is the second proof point of Volkswagen’s doubling-up SUV strategy following the launch of Atlas Cross Sport earlier this year. The carmaker claims that Taos will offer great value, excellent fuel economy, and great packaging, as well as advanced infotainment and driver-assistance features. The official reveal will take place next month, on October 13.

The teaser image gives a hint that the Taos will look somewhat like the Tiguan, but is likely to be smaller in proportion. In some markets like China, Volkswagen has a similar vehicle on offer, which is called Tharu. The thin LED strip flanking the headlights is reminiscent of the Tiguan. The LED strip run along the front of the vehicle to span the area between the headlights.

The town of Taos is home to 6,000 people, and boasts a 400-year history and a 1,000-year-old Native American community just a few miles from the centre of town. It’s notable for its artist community, world-class ski resort, and stunning landscapes, including vast plains, the Sangre de Cristo mountains, and the spectacular Rio Grande Gorge.

Incidentally, Taos was also home to John Muir, an engineer turned mechanic, and author of “How To Keep Your Volkswagen Alive: A Manual of Step-by-Step procedures for the Compleat Idiot." First published in 1969, and illustrated by local artist Peter Aschwanden, this counter-culture guide to Volkswagen repairs quickly developed a popular following. The book, started in Muir’s Taos shop, has helped keep countless VW models running, from Beetles and Buses to Type 3 and Type 4 models.