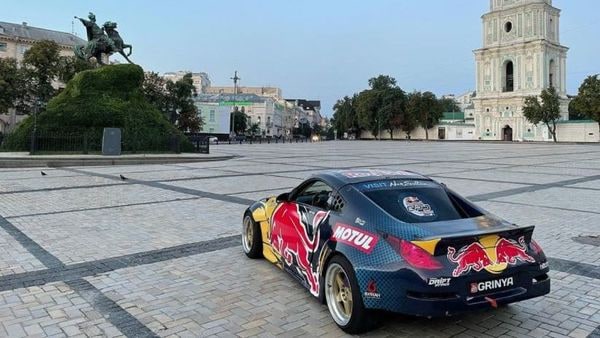 One of the stunt cars right before the incident. (Image: Instagram/Grinchukdrift)

An unauthorised drift stunt organised by a popular energy drink company in Kyiv, Ukraine has left UNESCO world heritage site in danger. The RED Bull energy drink company that is known for organising motorsports stunt events promoted their product via a drift stunt around a statue in front of Saint Sofia Cathedral, which has a great historical value and a heritage site as well.

The city officials claimed that beyond the danger to the public the two drift cars left dark tyre marks on more than 2,000 sq metres of traditional Kyiv yellow bricks. The cars were being driven by Conor Shanahan and Oleksandr Grynchuk.

They also roped in local rap star Alyona Alyona, who was sitting in the passenger seat. The organisers also made no efforts to close off the square to pedestrians. After videos of the stunt became online ciriticism started against the company. Since then, the videos have been taken down by the energy drink company.

Konstiantyn Usov in a social post wrote that Red Bull had no security measures to protect pedestrians and they risked dozens of lives. “People would go to work in the morning across the Square and had to avoid the drifting cars. The results could have been indeed tragical," he further wrote.

One of the company's officials later tried to manage the situation by posting a video. The video showed how the crews were attempting to remove the tyre marks. The official also claimed that it will be better than it was. Kiyv police have opened an investigation into the incident. Meanwhile, the city authorities are estimating the monetary value of the damages made by the drift stunt event.