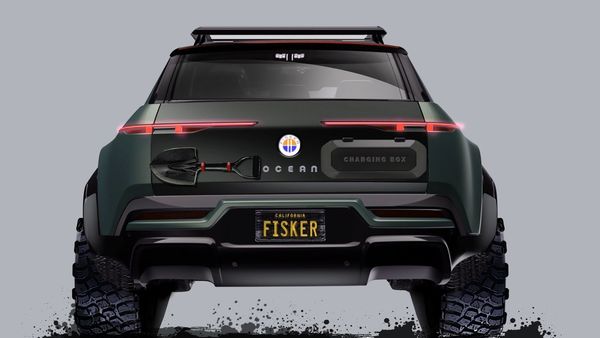 A year before it was supposed to go to production, electric carmaker Fisker has teased how its new concept electric off-roader Fisker Ocean will look like. The company had planned to unveil the electric Ocean SUV concept at the Geneva Motor Show which got cancelled in March due to the coronavirus outbreak.

Designer and founder of the company Henrik Fisker took to Twitter to tease a sketch of the concept electric SUV. He termed it the ‘rescue zero emission vehicle’, and said more details about the car will be revealed in the coming days.

Where is the spare #tire! Takes too much space in the trunk & wouldn’t fit in a frunk! I’ll show it next week..#Fisker Ocean #EV Info, download our app : iOS: https://t.co/DyJYxeHAtF
Android: https://t.co/NMVvrnVc7c #SUV #health #adventure #AWD #ExtremeRescues #Discovery pic.twitter.com/btqlWJ5Rn6

The Fisker Ocean, the American electric SUV, will have an 'off-road' version that will presumably be powered by the same engine as the original model.

The  'off-road' version of the Fisker Ocean has a more aggressive styling. Its aesthetic makes it clear that it is a vehicle that seeks to perform on the most difficult terrain. It is evident from some of the protective bars that are incorporated. The tires sitting pretty under wide wheel arches look quite suitable for off-road, in addition to its tread due to its wide profile.

The hood of the car is especially striking, and not because of it, but because there is a spare wheel. You can have another on the roof. However, Fisker has teased that the company has found a 'better place' to store the spare which will be revealed gradually.

This off-road version of the Fisker Ocean is likely to share the same powertrain with the conventional Ocean SUV. It is likely to get two motors, one located on each axis. Their total power output is still unclear, but it is known that they are powered by an 80 kilowatt-hour battery that allows them to travel up to 480 kilometres on a single charge.

Fisker is reportedly looking at NGOs and militaries as potential customers for this concept electric SUV. The beefy look of the vehicle suits for hardcore customers. However, the final look of the car is yet to be finalised as the company is still working on it before it goes into production some time later this year.

The company could launch the 'zero-emission' Fisker Ocean off-roader at a starting price of around $37,000 (around Rs. 28 lakh).