The Project Vector concept vehicle has been developed as a spin-off start-up model by JLR, which is ready for its market flotation in coming months to move the development of the model to the next stage for it to be ready to pilot on the streets by late next year.
By : PTI
| Updated on: 19 Feb 2020, 09:38 AM 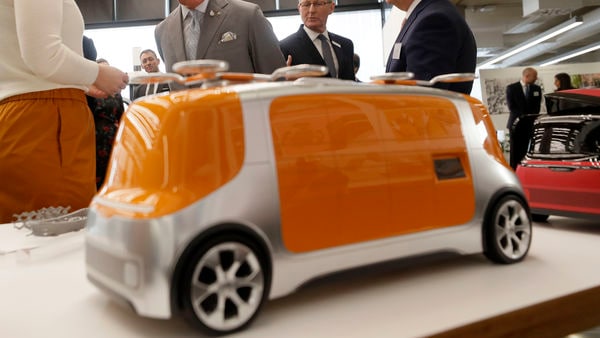 Tata Motors-owned Jaguar Land Rover (JLR) on Tuesday unveiled a new futuristic electric driverless car concept as part of a spin-off project developed at its new innovation centre at the University of Warwick in central England.

Project Vector, described by the automotive major as an advanced, flexible, multi-use electric vehicle that is "autonomy-ready", has been developed at the National Automotive Innovation Centre (NAIC) – Europe's largest auto innovation centre of its kind.

"Project Vector shows Jaguar Land Rover as a leader in innovation to make our societies safer and healthier, and the environment cleaner," said JLR CEO Ralf Speth on the sidelines of NAIC's official launch by Prince Charles.

"Through this project, we are collaborating with the brightest minds in academia, supply chain and digital services to create connected, integrated mobility systems – the fundamental building blocks for Destination Zero," he said.

The company's Destination Zero mission refers to a focus on achieving a future of zero emissions, zero accidents and zero congestion through its products, services and across its facilities.

The Project Vector concept vehicle has been developed as a spin-off start-up model by JLR, which is ready for its market flotation in coming months to move the development of the model to the next stage for it to be ready to pilot on the streets by late next year.

"The compact, flexible vehicle concept measures just four metres in length and is designed for the city, packaging all its battery and drivetrain components into a flat floor, to allow a variety of uses. The revolutionary interior cabin space allows seating configurations for private, or shared use and even the opportunity for commercial applications, such as last mile deliveries," JLR said.

The intention is to collaborate with the local area through Coventry City Council and the West Midlands Combined Authority to plan a mobility service from late 2021, as a living laboratory for future mobility on the streets of the city of Coventry – about 100 miles (160 kms) from London.

"Future urban travel will be a composite of owned and shared vehicles, access to ride hailing and on-demand services as well as public transport. Our vision shows the vehicle as a flexible part of the urban mobility network that can be adapted for different purposes," explains Dr Tim Leverton, Project Director for Vector.

Professor Dr Gero Kempf, Chief Engineer, said: "It's also a unique opportunity – a concept platform designed and engineered around urban centric use cases by a major carmaker as a blank canvas for developing tailored services and apps in the ecosystem of a smart city".

Vector is one of the first major projects to be developed within the new NAIC, a 150-million pounds (USD 195 million) innovation centre created along with the Warwick Manufacturing Group (WMG) to house hundreds of academics, researchers, engineers and designers from across the UK and India to work on cars and vehicles of the future.