Home Auto Cars News Skoda Vision In Will Be Launched As Kushaq, Will Face Off Vs Creta And Seltos

Skoda Vision IN will be launched as Kushaq, will face off vs Creta and Seltos

Skoda Kushaq derives its name from a Sanskrit word which means King. Skoda would hope Kushaq is able to rule the mid-size SUV segment like a monarch.Expect Kushaq to be launched in India sometime in March.
By : HT Auto Desk
| Updated on: 07 Jan 2021, 11:14 AM 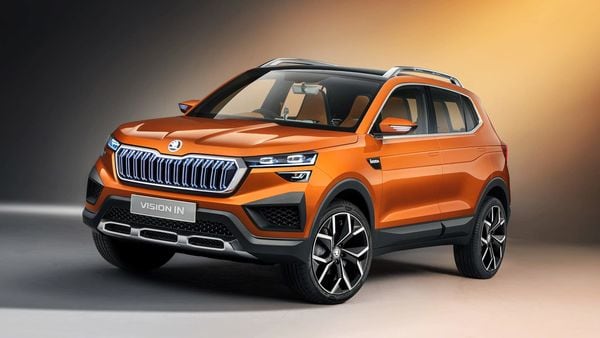 While the production version may be slightly different, here is looking at Skoda Vision IN which will be launched as Kushaq.

Skoda Vision IN is perhaps the most-awaited SUV from the Czech car maker in India and on Thursday, it was confirmed that it will be launched as Kushaq in the market here. Underlining that the name is derived from Sanskrit which means King or Emperor, Skoda is indeed hoping that Kushaq is able to reign supreme in the mid-size SUV segment which has some strong players like Hyundai Creta, Kia Seltos MG Hector and Tata Harrier.

Skoda is indeed betting big on Kushaq and is promising that the SUV is a culmination of its 125 years of automotive heritage. While the unveiling is expected in March, the launch is scheduled shortly after.

Based on the MQB A0-IN platform under Skoda's 2.0 project, Kushaq will get a pleasing butterfly-shaped front grille, LED head lights, skid plate, diamond-cut alloys and roof rails. Expect the cabin to be packed with features if Kushaq is to compete with its rivals here. A floating touch-based infotainment screen, leather-wrapped steering wheel and an all-digital driver display are a given, apart from other highlights.

Skoda is yet to confirm what's under the hood but expect a 1.0-litre and a 1.5-litre petrol engine to power the Kushaq, mated to a six-speed manual and a seven-speed automatic unit.

Kushaq will look to appeal to prospective buyers on a number of fronts. Zac Hollis, Brand Director at Skoda India, is of the opinion that the SUV will bring a solid blend of all that makes an SUV, a successful SUV. "The new Skoda Kushaq will offer a compelling combination of the brand's timeless design ideals, unmatched performance, superior build quality, exemplary value proposition, and enhanced safety and security," he said. "It is deemed to be the best seller in its class, setting the benchmark for functionality, practicality, spaciousness, and convenience."