The Megane eVision will be an electric crossover based on Renault’s new CMF-EV platform.The Megane eVision concept is claimed to have a range of over 450 kms in single charge.
By : HT Auto Desk
| Updated on: 16 Oct 2020, 09:01 AM 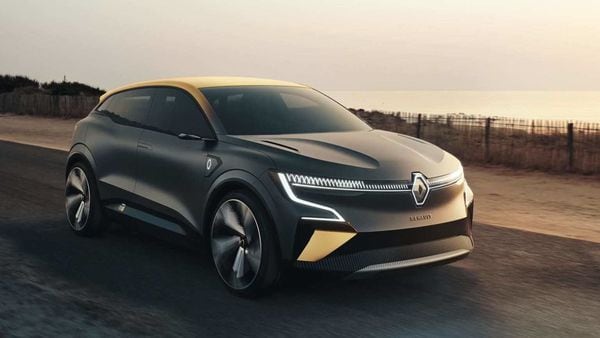 Renault has taken the covers off its new electric vehicle by the name of Megane eVision. The next Renault Megane will be fully electric and will have a crossover design.

The Megane eVision concept is based on Renault’s new CMF-EV platform, which Renault hopes to use in its latest electric offensive. Megane will be the first to hit the streets under a production version and may not be very far from the prototype showcased on Thursday.

This new platform offers a 2,700 mm wheelbase, housing a battery with a 60 kWh capacity working at 400v under the floor, which will mean talking about more than 400 km of electrical autonomy under the WLTP cycle. Renault also claims to have the thinnest battery on the market, which makes it easy to install in the floor and lower the car's centre of gravity.

The design of the car is not too different from what other recent crossovers from the French carmaker. In fact, from certain angles, it resembles the Renault Captur or Clio. However, the front LED light strip tuning across the Bonet gives it a futuristic look.

Weighing 1,650 kilos, the electric automobile is equipped with a 160 kW (217 horsepower) electric motor for a torque of 300 Nm. According to Renault, the 0 to 100 kmph is carried out in less than eight seconds. The four-wheeler also benefits from a range of 450 kilometres, according to the WLTP homologation cycle, thanks to its 60 kWh battery.

The vehicle is compatible with the 130 kW DC fast charge to regain 200 kilometres of range in 30 minutes.

According to reports, the production model of the Megane eVision will be introduced in the fall of 2021, followed by marketing in early 2022. Production should start in September 2021.