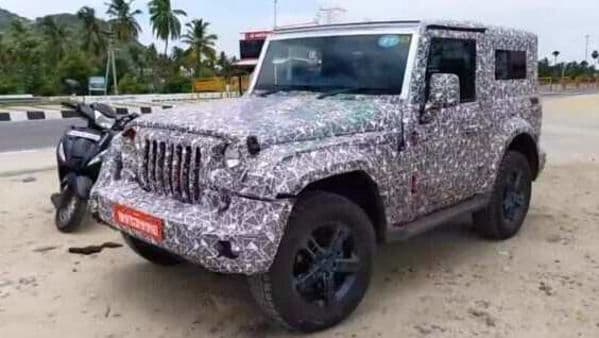 It is no news that Mahindra is developing the second generation Thar SUV that has been undergoing road testing for more than a year now. Recently, it has been spotted yet again in its hard-top avatar. While the launch details aren't confirmed as of yet but expect the all-new Thar to go on sale in India around the upcoming festive season.

The purpose-built off-roader has grown into an all-new model with the generation change. From the available spy pics, it appears to be bolder and slightly wider than the model it replaces.

Even though it has evolved heavily over the last-gen model, it still retains some of the traditional design elements such as circular headlamps, flat bonnet, brick-shaped tail-lights etc.

The Thar 2020 will be underpinned by an all-new ladder on frame chassis. The new architecture is designed to provide the Thar better driving dynamics and improved off-road capabilities. The company has revealed in the past that the next-gen Thar will be global model and hence it would be safe to expect that the SUV will be launched across various international markets.

Its cabin will be a much more comfortable and feature-rich space, especially against the last model. It will benefit from a completely new dashboard, meter-console, re-positioned passenger grab handle, new steering wheel and seats. At the back compartment, it will get front facing rear-seats unlike the first-gen model. This update will make it more convenient and safe for the second-row passengers.

In terms of mechanicals, expect it to feature a 190 PS/380 Nm 2.0-litre TGDI mStallion petrol motor. Moreover, there will also be an all-new 2.0-litre four-cylinder unit. The transmission options will include a six-speed manual gearbox as well as a torque converter automatic unit.

It will rival the likes of the upcoming 2020 Force Gurkha SUV and the India-spec five-door Suzuki Jimny.