Mahindra is all set to launch the 2022 Scorpio-N facelift SUV in India on June 27. The new generation Scorpio will be sold alongside the previous generation models which will now be called Scorpio Classic.
By : HT Auto Desk
| Updated on: 04 Jun 2022, 10:06 AM 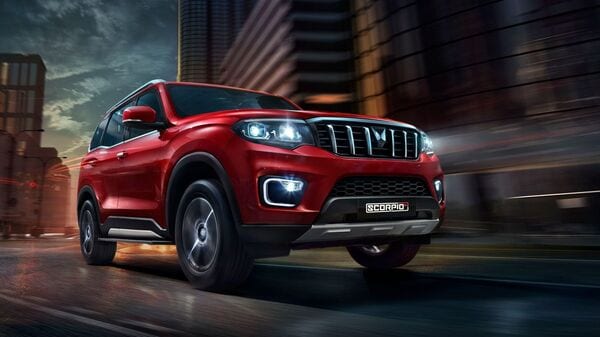 The latest Scorpio-N from Mahindra is completely overhauled in terms of its exterior design language and gets LED head light units, LED DRLs, a reworked front grille, more pronounced bumper and a reworked alloy design.

Mahindra Scorpio-N, the facelift version of one of the oldest existing models from the carmaker, is all set to hit the Indian markets later this month. Mahindra and Mahindra has already shared the new looks of the SUV with sharper designs and a whole lot of updates to the exterior. Now, for the first time, the carmaker has officially showcased the interior features ahead of the scheduled introduction on June 27. In a new teaser, Mahindra shared what the SUV has to offer in terms of driving experience.

The new teaser video, shared by Mahindra and Mahindra on its social media handles, promises that the 2022 Scorpio-N facelift SUV will offer the best-in-class high commanding seats. This means that the new Scorpio will have front seats higher than other rivals in the segment, which will offer a more commanding view of the road while behind its wheels.

The teaser video also has a sneak peek into the dashboard, especially the instrument console. In the video, the driver display seems to be semi-digital in nature, offering speed and RPM gauges in analogue format.

Earlier, in a leaked video of the interior of the 2022 Scorpio-N, it was revealed that the SUV will come with a large infotainment screen which is sourced from Sony, similar to the ones seen inside some of the lower variants of the XUV700. Under the screen, the SUV will get physical buttons for volume, climate control and other functions. The leaked video also revealed that the SUV will get an upgraded flat-bottom steering wheel laced with mounted controls like cruise control and other features.

The interior of the Scorpio-N SUV is likely come with more features such as new upholstery, dual-tone theme, 360-degree camera, dual-zone climate control and connected car technology among others.

The new Scorpio-N will come with both petrol and diesel engines. These include the usual 2.2-litre diesel engine and a 2.0-litre turbocharged petrol unit. The 2.0-litre turbocharged petrol engine, which is also being used in the flagship SUVs like XUV700, is likely to generate 168 hp of power. This will be nearly 40 hp more than what the standard 2.2-litre diesel engine can generate. Even the 4X4 variant of the new Scorpio-N, which will come with the same diesel unit, is likely to be less powerful than the petrol engine on offer.