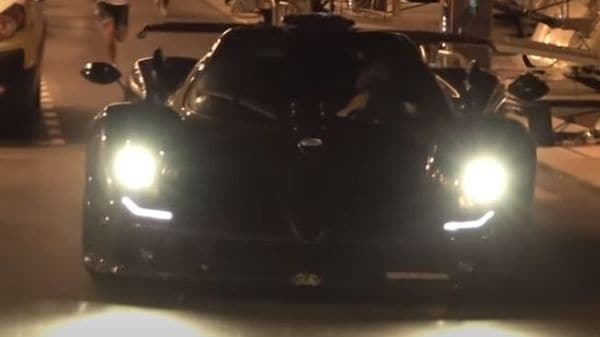 Lewis Hamilton and his car collection have been the point of discussion for many auto enthusiasts. But the one-off Pagani Zonda 760LH he owned since 2014 is the one car that has drawn the most attention from automotive enthusiasts. As it appears, Hamilton has now sold the hypercar.

Carscoops reports that the seven-time Formula One champion driver has parted wats with his one-off Pagani Zonda 760LH. He has been seen driving the car several times in Monaco and it has remained one of his favourites. He even said a few years ago, that the Zonda was terrible to drive, asserting that it was the best-sounding car in his garage but handling-wise it is the worst.

However, the car probably clocked less than 1,000 km since purchase. It was imported into the UK and currently is in the North West.

Back in 2015, Hamilton was even involved in a low-speed crash in the Pagani Zonda 760LH, but that was repaired swiftly.

Pagani Zonda 760 is one of the most exclusive hypercars ever built in the world. There are only around two dozen 760 variants of the Zonda around the world. The one Hamilton purchased the just the second one in the series. It is also one of the just a handful that was built from the ground up.

The Pagani Zonda 760LH that Lewish hamilton owned draws power from a massive 7.3-litre naturally aspirated V12 engine sourced from Mercedes-AMG. This engine is good to kick out 750 hp of peak power and 780 Nm of massive torque output as well. For transmission duty, the hypercar gets a six-speed manual gearbox that sends power exclusively to the rear wheels. Interestingly, most other Pagani Zonda 760s come equipped with automated manual transmission setups with paddle shifters.