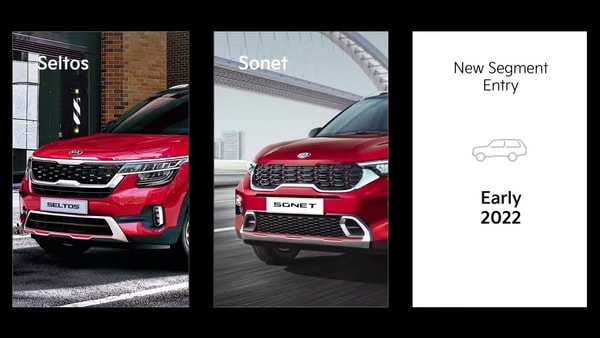 Kia to launch updated Seltos and Sonet SUVs in India next month.

Kia Motors has announced that the brand will reinvent itself in India with the official launch of the new logo, a new brand name Kia India and announcement of at least three vehicles heading India's way soon. India is the first country outside Kia's home turf South Korea where Kia has updated its brand with new logos.

Kia India has announced that the existing Seltos and Sonet SUVs, which forms almost 90 per cent of its overall sales in India, will get facelift versions as early as next month. Both cars are expected to get updated design, with the new logo replacing the old, and some tech upgrades.

Besides these two facelift models, Kia India has also announced that it will launch a new model, possibly another SUV, as early as next year. However, the Korean carmaker has not given any hint whether this new car is going to be from its existing global lineup, or a brand new model altogether.

(Also read: Seltos and Sonet SUVs all set to be first Kia cars in India to get new logo)

At a digital event today, the Korean carmaker highlighted that it is currently the fourth most sold car brand in India, and also the first carmaker to achieve 2,50,000 sales milestone in the country. According to Kia India, it sells one car to its customers every two minutes.

Besides the brand updates and new model announcements, the Korean carmaker has also highlighted how it is going tackle the challenge of growing demand and reduce waiting period for its cars in coming days. The carmaker has assured that it will soon start a third shift at its Anantapur facility in Andhra Pradesh, and ramp up production for existing lineup of cars - Seltos, Sonet and Carnival.

Kia India also said that it will expand its network in India to 350 touchpoints that will be spread across more than 200 cities and towns across the country.

Beyond India, Kia also plans to launch as many as 11 electric vehicles in the next five years. These will include seven new dedicated electric vehicles. Kia aims to sell 1.6 million eco-friendly cars by 2030.