Kia teases a new SUV for this country, possibly the new Sportage

The new Kia Sportage will make its debut on October 27. It is based on Kia’s N3 platform and will come with dual 12.3-inch displays, a wide array of powertrains including an electrified 1.6-litre four-cylinder engine.
By : HT Auto Desk
| Written By : Sabyasachi Dasgupta
| Updated on: 21 Oct 2021, 09:02 AM 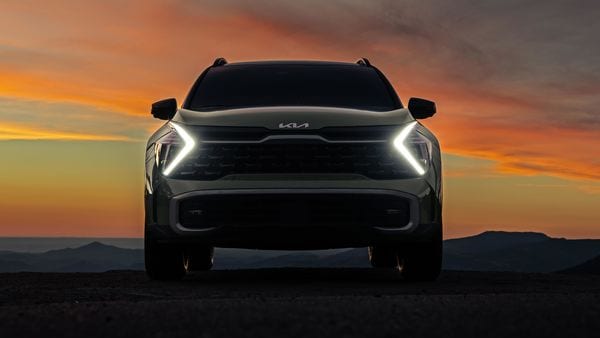 Kia Sportage 2022 SUV teased ahead of its official debut on October 27.

Korean carmaker Kia has released a teaser for its upcoming SUV for the US markets. While Kia has not revealed the name yet, it is widely believed to be the new generation Sportage SUV from its appearance in the teaser image.

Kia has confirmed that the ‘all-new, boldly designed and highly capable SUV’ will make its US debut October 27. It is expected to go on sale from early next year.

Kia has said that the new Sportage SUV will come with a wide range of ‘powerful and efficient engines’. The carmaker has also promised that the SUV will be available in both front-wheel and all-wheel drive options. Apart from that, the 2022 Sportage SUV is also likely to get ‘multiple standard advanced driver assistance systems and high-tech infotainment options’.

Kia also promises the Sportage SUV to carry traits that will garner enough interest among those who are enthusiast. The new Kia Sportage is likely to have ‘new level of off-road capability’ with increased ground clearance, multiple driver-selectable terrain modes and all-terrain tires.

The fifth generation Sportage SUV is going to be based on Kia’s N3 platform. This is the same platform that underpins some of its Korean sibling Hyundai models like Tucson, Sonata, Santa Fe, as well as Kia models like Sorento and K5.

As far as the looks are concerned, Kia Sportage will continue to wear a bold front face with the traditional tiger-nose grille. It is flanked by boomerang-shaped LED units. The cabin of the new generation Kia Sportage is likely to draw some influences from the EV6. There will be infotainment and driver information systems clubbed into a single 12.3-inch curved glass display unit. It is also expected to come with haptic feedback and physical controls on the dashboard.

The new Kia Sportage is likely to be offered with both hybrid and a plug-in hybrid versions for the first time. The Sportage SUV is likely to get the same 1.6-litre turbo four-cylinder engine that powers the likes of Hyundai Tucson and Santa Fe or Kia Sorento. The engine will draw power from an electric motor linked to lithium-ion battery pack and is expected to be mated to a six-speed automatic gearbox. The hybrid powertrain is expected to produce around 227 hp of power, while the plug-in hybrid model is likely to produce 261 hp, thanks to a more powerful 99-hp electric motor and a 13.8-kWh battery.