Kia has unveiled the new generation Sportage SUV in United States. The Korean carmaker has revealed that an all-electric version of the Sportage SUV will also arrive soon.
By : HT Auto Desk
| Written By : Sabyasachi Dasgupta
| Updated on: 28 Oct 2021, 08:39 PM 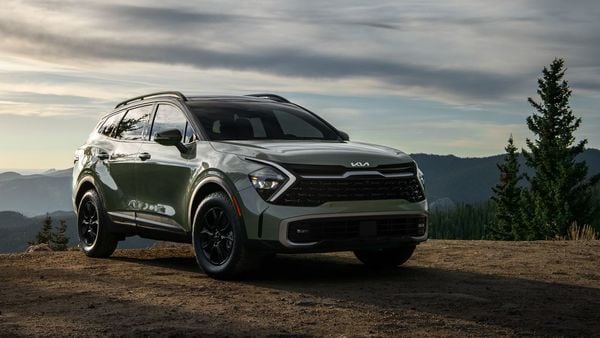 The 2023 Kia Sportage has become bigger in size, gets bolder design elements as well as trail-ready version for the US markets.

Kia has taken the covers off the new generation Sportage SUV, one of its best-sellers around the world, for the US markets. Kia Sportage in its new iteration has become more off-roader than ever with a trail-ready version, has grown in size with bolder design elements and loaded with more features and technology.

Kia will offer the new Sportage in two trims which include the X-Line and X-Pro, the latter aimed more towards adventurists and packed with off-road ready features including all-terrain tires, among other elements.

Kia says that an all-electric Sportage SUV could also hit the markets soon. Sean Yoon, president and CEO, Kia America, Kia North America, said, “While Kia moves purposefully toward electrification, we are further strengthening the Sportage lineup by adding a variety of options suited for all different kinds of customers."

In terms of design, it is significantly larger than its predecessor by 18 cm in length and a wheelbase which is 7 cm longer. The interior is also completely redesigned with a dual screen dash.

Kia has not shared full details on the new Sportage SUV yet. However, it has confirmed that the base engine of the Sportage will come with a 2.5-litre four-cylinder naturally aspirated engine instead of the turbocharged one. It's slightly larger than the 2.4-litre engine used in the existing models of Sportage. The new engine is capable of producing 187 hp of maximum power. Kia has also confirmed that a hybrid version of the Sportage will come soon.

There is change in the transmission department too. Kia Sportage will now come with a new eight-speed automatic unit instead of the previous six-speed automatic gearbox.