First customer unit of 'Made in India' Kia Sonet rolled out

Kia Sonet will be officially launched on September 18. Bookings are currently open.Sonet will take on the likes of Vitara Brezza, XUV300 and Nexon.
By : HT Auto Desk
| Updated on: 04 Sep 2020, 10:32 PM 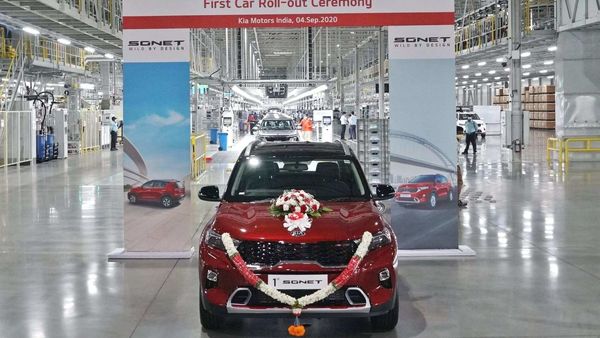 Sonet sub-compact SUV will be manufactured exclusively at Kia's plant in Andhra Pradesh.

Kia Sonet is all set for an official launch on September 18 and the Korean car maker has managed to create quite a lot of buzz around the sub-compact SUV. On Friday, it announced that it had rolled out the first customer car manufactured at its state-of-the-art facility in Andhra Pradesh's Anantpur.

Sonet will be manufactured at the Kia's Anantpur facility which is also home to the Seltos SUV, the first product from the company in India. Kia had made its India debut with the Seltos in August of 2019 and managed to get off to a rousing start. Since, it has also launched the Carnival luxury MPV but it is the Sonet that is now carrying the bulk weight of expectations.

Sonet will be a 'Made-in-India' product that will be shipped to various international markets as well. Kia has assured that there would not be any difference in the quality of make between the car for India and the cars shipped globally. With it, therefore, the company is also looking at having India as the hub from where exports to nearly 70 markets can be made.

The roll of out of the first Kia Sonet customer car, therefore, assumes a whole lot of significance for the company. "It is a matter of great pride that we have been able to stay true to our promise of ‘The Power to Surprise’ and bring in Sonet in time, despite the unprecedent challenges the world is facing today," said Kookhyun Shim, MD and CEO, in a press statement issued by Kia.

Pre-launch bookings for Sonet are open and the car managed to get 6,523 orders on just the first day. Prospective customers have to pay ₹25,000 to book the car. (Full report here)

The interest in the Sonet is as much because of what it promises to bring to the market as the segment in which it is going to compete in. The sub-compact SUV segment is extremely lucrative for companies, as is extremely competitive. Additionally, Kia says Sonet will offer more than 30 segment-first features to wow prospective buyers with

Much like the Seltos, Sonet will also be offered in both GT Line as well as Tech Line. The former will have GTX+ variant on offer while Tech Line will feature HTE, HTK, HTK+, HTX and HTX+.

The GT Line seeks to give the car a more sporty visual appeal - on the outside as well as in the cabin, and gets red colour accents on the large and imposing front grille, a red strip on the side and continuing highlights over at the rear.

The rear of the Sonet gets smart-looking tail lights which are connected with a reflector garnish. This lends the car a wider visual profile, ably complimented with a sporty dual muffler design and diffuser fin rear skid plate.

On the inside, Sonet boasts of several segment-first features and brags of being a tech-loaded car. It coms with Bose seven-speaker system with sub-woofer and LED Sound Mood Lamps, a 10.25-inch HD infotainment screen, UVO connectivity options, wireless smartphone charger with cooling function, ventilated driver and front passenger seats, air purifier, among others.