To be positioned as a luxury three-row MPV, Kia Carnival will directly lock horns with Toyota Innova Crysta.Kia will showcase Carnival at Auto Expo 2020.
By : HT Auto Desk
| Updated on: 23 Dec 2019, 10:33 AM 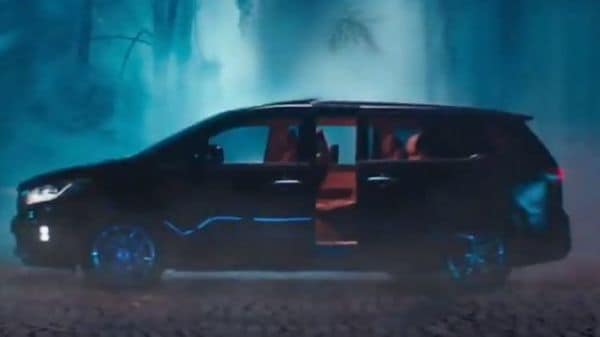 Kia Motors India recently released the first teaser of its upcoming MPV - Carnival. Featuring Bollywood actor Jim Sarbh, the short video gives a vital glimpse into the car that promises to build on the success that Seltos SUV has achieved over the past several months.

Kia Motors made a dashing debut in India with the Seltos selling by the proverbial dozens. With a waiting period spanning several weeks for the car, Kia is now raring to build on the buzz and will drive in the Carnival in India in 2020.

To be manufactured at Kia's brand new Anantpur facility, the Carnival will be showcased at the Auto Expo 2020. The teaser video recently released, while primarily focusing on Sarbh acting as royalty, underlines the 'Extravagance' that Carnival promises. To be positioned as a luxury three-row MPV, it will directly lock horns with Toyota Innova Crysta.

Expect the Carnival to be quite the looker with projector head lights and DRLs, Kia's signature Tiger-nose front grille and a tall profile.

On the inside, Kia will most likely equip the Carnival with Captain's Seat in the second row, a large infotainment system and two sunroofs. The teaser video further hints at a premium fit and finish, and it is very likely to get a wide variety of creature comforts on the lines of what Seltos offers.

Under the hood, the Carnival is likely to get a 2.2-litre diesel motor with an eight-speed automatic gearbox.

The premium MPV segment has fared decent in the years gone by even if not many players have tried their hand here. Kia, however, appears not just confident but robust and will hope two is a charm indeed once it brings out the Carnival as the Seltos' elder sibling.