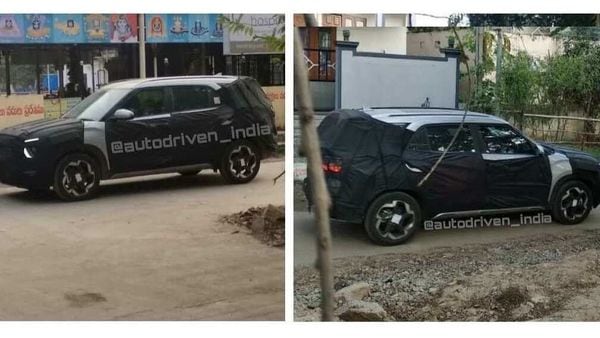 Hyundai Motor is gearing up to introduce a longer version of the Creta, which most likely will come out to be the Creta 7-seat SUV. Albeit, the official name is yet to be confirmed. The Korean automaker has been busy testing the same car in and outside the country, and its prototype has been spotted undergoing tests several times in the past. The car is expected to make its global debut by the end-2021. Hyundai has also trademarked Alcazar nameplate in India, which might also be used for the longer version of Creta in the future.

While the test unit (above) is smartly hidden under heavy camouflage, some of the newer details including the alloys, roofline structure are easily visible. The new SUV will benefit from styling bits including a cascading grille with mesh pattern, split LED headlamps and taillamps, sporty bumpers, and dual exhaust ports. It will also get front parking sensors and roof rails. The alloy wheels design on the new SUV looks inspired by the wheels found on the Venue subcompact SUV.

In terms of dimensions, the 7-seater Creta-based SUV will stand longer than the existing model. Reports say that it will be at least 30 mm longer and will also sport a 20 mm longer wheelbase.

Inside, the new SUV will feature a larger cabin space and there will be a new third row for two more occupants (total seven). Some of the key comfort and entertainment features may include a touchscreen infotainment system with BlueLink connected car tech, ventilated seats, flat-bottom steering wheel, 360-degree camera, panoramic sunroof, and more.

Under the hood, it is likely to borrow its powertrain from the existing Creta SUV. The options may include 1.5-litre petrol, 1.5-litre diesel and 1.4-litre GDI turbocharged petrol units.