Home Auto Cars News Forget Pizzas, Your Next Car May Be Home Delivered Amid Coronavirus Outbreak

Forget pizzas, your next car may be home delivered amid coronavirus outbreak

Car dealers around the globe are bearing a significant loss due to the coronavirus outbreak.Many have now decided to extend every possible help to prospective buyers to ensure coronavirus is no stumbling block in their car-buying plans.
By : Bloomberg
| Updated on: 19 Mar 2020, 09:49 AM 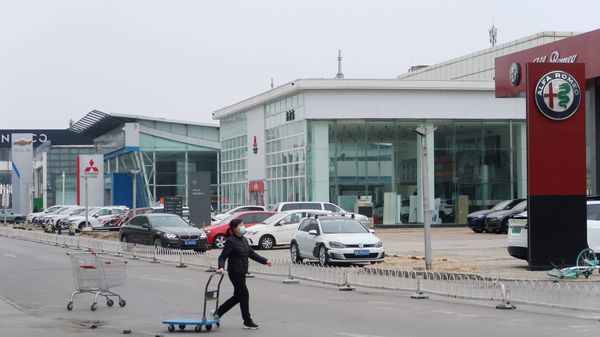 Lured by an ad for 0% financing, a customer phoned Chuck Olson Kia in Seattle saying he wanted to buy a Sedona minivan. But with more than 400 confirmed coronavirus cases in Washington state, he said there was no way he’d go to the dealership.

So the salesperson instead sent a staffer to his home with paperwork and closed the sale of the loaded $40,000 vehicle. Of course, given the circumstances the dealer was fortunate the buyer even agreed to meet in person at his house.

“If they will let us, we’ll come to them," said Jim Ault, sales manager for the dealership, which sells both Chevrolets and Kias. “Volume is down but we’re still in business."

That one deal will hardly make up for the economic damage inflicted by the coronavirus, of course. Ault said his sales are probably down more than 20% so far this month and analysts are forecasting an ugly year nationally for manufacturers and dealers. So they are unveiling an array of tactics to mitigate the damage, including the 0% interest-rate gambit from both Kia and Chevrolet -- which hearkens back to the “Keep American Rolling" campaign General Motors Co. offered after the Sept. 11, 2001 terrorist attacks.

“I remember the ’94 earthquake and 9/11 and the recession, where we just had to press on and work hard," said Beau Boeckmann, president of Galpin Motors in Los Angeles, which sells brands including Ford, Honda and Volkswagen. “This one, we really don’t know what to do. Right now, we’re just playing it minute by minute and that’s something I’ve never had to do before."

To be sure, the plight of the dealers is not nearly as dire as restaurants and retailers that have been forced to shut down. Since cars still need mechanics to keep running, dealerships have been spared the harshest restrictions that have brought commerce in other segments of the economy to a screeching halt.

But few doubt that the virus will have a huge impact on the industry. LMC Automotive, a research firm, has lowered its 2020 forecast by about 750,000 vehicles to as low as 16 million this year, down from about 17 million in 2019, said Jeff Schuster, LMC’s senior vice president of forecasting. Morgan Stanley’s Adam Jonas sees the market falling even further, down to the recessionary level of 15.5 million.

That will spill over to dealers and parts suppliers. Joe Spak, an analyst at RBC Capital Markets, slashed price targets for all 22 of the auto-related companies he covers and downgraded four of them in reports Monday.

Tesla Inc. will see a sales decline this year even with the much-anticipated Model Y crossover SUV coming, he said. Ford Motor Co. will post its first annual loss since 2009 and GM will burn $3.5 billion in cash. None of those outcomes seemed plausible before the outbreak of the virus.

With that kind of damage in the offing, GM is offering 0% financing for 84 months with 120 days of deferred payments. It’s marketing the program under various names, such as “Chevrolet Cares" or “Cadillac Assurance." Kia has offered 0% for at least 60 days and other manufacturers are expected to follow with similar incentives to try to stimulate sales.

GM positioned its 0% financing deals as an economic savior after the Sept. 11 terrorist attacks. The “Keep America Rolling" campaign resulted in an annualized selling rate of almost 22 million vehicles in the next month and kept the economy from a deep slump, Schuster said.

The new campaign will help, especially in markets that haven’t been hit as hard by the virus, said Mike Bowsher, who owns the Carl Black Automotive Group, which has stores in Georgia, Florida and Tennessee. He said his sales this month are still down 10% to 15%.

The pandemic has altered traditional selling techniques. In some cases, he said, shoppers will come to the dealership but ask to fill out paperwork and have their trade-in appraised in the parking lot. They’d prefer not to walk into the showroom and be around other people.

“It’s unusual times, you have to do unusual things," said Bowsher, who is co-chairman of the Chevrolet Dealer Council.

At dealerships, workers are swabbing the interior of cars with disinfectant wipes before and after they enter the service bay and on the showroom floor, said Rhett Ricart, a Ford dealer in Columbus, Ohio, who’s chairman of the National Automobile Dealers Association. Dealers are reducing hours of showrooms, where traffic has slowed to a trickle, keeping on skeleton crews rather than closing altogether, so that workers continue to get paid.

“I haven’t heard any talk of not being able to get a car or a manufacturer saying they couldn’t build it at this point in time," Ricart said.

Auto auctions, where dealers buy and sell used cars, have already closed. That will have an impact on the used-car market and hurt availability.

But Ricart said that shutting down dealerships would inflict severe damage on the economy. Dealers have been deemed essential in San Francisco, which is instituting tighter restrictions on which businesses can remain open during the pandemic, he said.

“If you closed car dealerships, how are cars going to get service for the doctors to get to the hospital and the trucks running down the freeway carrying goods?" Ricart said.