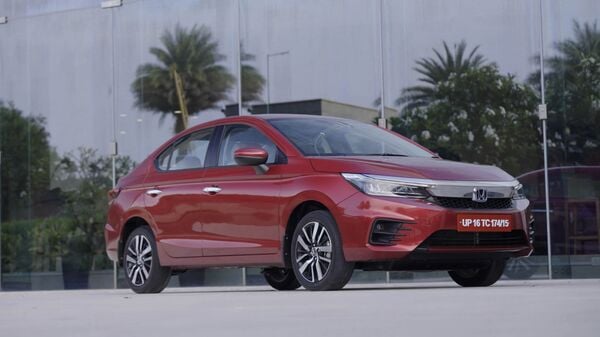 The Honda City Hybrid, under its hood, sports a 1.5-litre petrol motor with two electric motors.

After getting launched in the Indian market a few weeks back, Honda has commenced the deliveries of the City e:HEV sedan in the country. Based on the top-of-the-range fully loaded ZX variant, the City Hybrid sedan has been priced at ₹19.50 lakh (ex-showroom) and comes out as the one and only pure hybrid sedan in its segment. Honda’s top management, including their President and CEO, recently handed over the keys to the first batch of customers of the City Hybrid.

The 2022 City e:HEV comes based on the current generation model which already retails in the Indian market. In terms of exterior looks, it appears to be almost identical to the conventional sibling with only minor nips and tucks. It uses blue hues on the company logo and e:HEV badging. In addition, there is also a new fog lamp surrounds, a spoiler on the boot lid, and a new diffuser design on the rear bumper.

Under the hood, the City e:HEV comes with an Atkinson cycle 1.5-litre 4-cylinder petrol engine which is responsible for producing 126 hp of maximum power and 253 Nm of peak torque. The engine connects with two electric motors, the first of which is used to charge the battery, and sends power to the second motor which turns the wheels. The car promises a mileage of 26.5 kmpl and offers three drive modes namely all-electric, hybrid, and engine power.