The fifth generation Sportage is shorter than its previous generation models and is offered with hybrid, plug-in hybrid and diesel powertrains as options.
By : HT Auto Desk
| Updated on: 01 Sep 2021, 14:56 PM 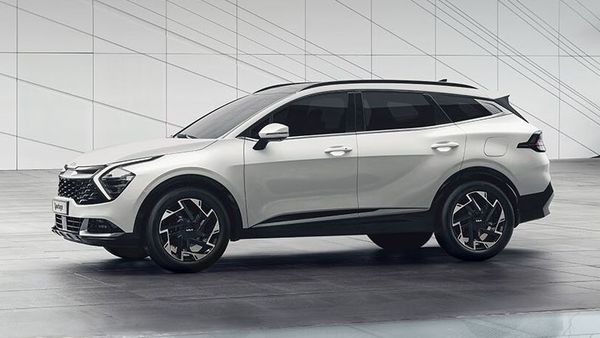 2021 Kia Sportage SUV has made its debut in Europe.

Kia has taken the covers off the new 2021 Sportage SUV, the brand's most popular SUV around the world, in Europe. The new Kia Sportage SUV will be showcased during the 2021 Munich Motor Show which is set to open for public in the next few days.

The fifth generation Sportage is shorter than its previous generation models and is offered with hybrid, plug-in hybrid and diesel powertrains as options. 2021 Kia Sportage stands 4,515mm in length, 1,865mm in width and 1,645mm in height, with a wheelbase of 2,680mm.

As far as its design is concerned, the new Sportage SUV showcases Kia's new design language Opposites Unite. It has clean but muscular shapes all around that enhances its dynamic road presence. Sportage gets the traditional black tiger-nose grille up front which extending over the entire width and connecting with the boomerang-shaped DRL LED headlights.

Kia Sportage for the European market will be offered with the choice of black roof to accentuate the sporty profile and highlight the C-pillar. At the rear, the European Sportage gets razor-shaped taillights that are connected by a thin horizontal line. The SUV will be offered with a choice of 17-, 18-or 19-inch wheels and six different designs, colours and finishes.

The new Kia Sportage has a boot capacity of 591 litres. However, by folding down the rear seats, it will be possible to add a total of 1,780 litres of cargo space.

On the inside, Kia has added a curved display integrated with a touch pad. The infotainment touch screen is 12.3-inch wide and supports OTA updates. The digital instrument cluster is also of the same size. It also gets wireless charging system for phones and premium Harman Kardon sound system as speakers.

The European version of the Kia Sportage will get a GT-Line version as well.

Under the hood, Kia Sportage gets a range of drivetrains, including a hybrid, plug-in hybrid and diesel engine. The PHEV variants is powered by a 1.6-litre T-GDI engine and a 66.9 kW electric motor that can generate 261 hp of power. The hybrid version also gets the same engine and can generate between 147 hp and 177 hp of power. The diesel engine, a 1.6-litre four-cylinder unit, can churn out between 113 hp and 134 hp.

The 1.6-litre T-GDI engine is mated with a 7-speed dual-clutch automatic transmission (7DCT) or a 6-speed manual gearbox (MT). The 1.6-liter diesel with mild hybrid technology can be chosen with a six-speed intelligent manual gearbox (iMT) or 7DCT dual clutch.