Tesla is working on improving built quality and is looking to achieve a production time of just 10 hours per car at its new European facility.Volskwagen's main electric-car factory in Zwickau currently needs more than 30 hours to produce a vehicle.
By : HT Auto Desk
| Updated on: 04 Nov 2021, 05:31 PM 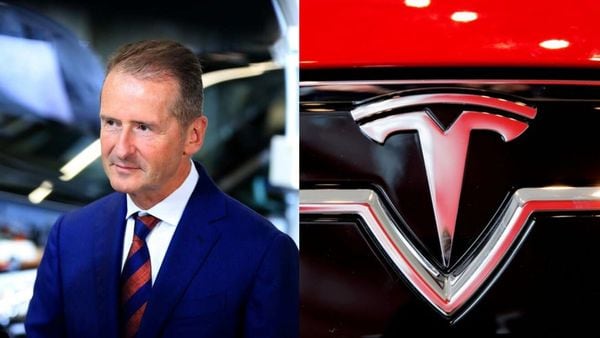 German automaker Volkswagen's Chief Executive Officer Herbert Diess has warned workers in the country to prepare themselves for a deeper overhaul in order to remain competitive as Tesla readies its first European factory near Berlin.

At a staff meeting in Wolfsburg, Diess highlighted how Tesla is working on improving built quality and is looking to achieve a production time of just 10 hours per car at its new facility. In comparison to this, Volskwagen’s main electric-car factory in Zwickau needs more than 30 hours to produce a vehicle, which the CEO urged, should be reduced to 20 hours next year.

At the first employee gathering at the world’s largest car-manufacturing site since the pandemic, Diess said to workers, “Yes, I’m worried about Wolfsburg. I want that your children and grandchildren can still have a secure job here with us in Wolfsburg. That’s my point today, that’s why I’m here."

The Volkswagen has been trying to accelerate plans for a fundamental transformation of the company in order to prepare it for the era of autonomous electric cars. The brand's new works council chief Daniela Cavallo has called on Diess to allocate a second electric car in Wolfsburg “significantly earlier than 2026". The timeline is even earlier than the Trinity project which is slated for production later, a key model to compete with Tesla.

Cavallo even called Diess' attention to resolve the persistent chip shortage that has hit Volkswagen harder than its peers Tesla or BMW AG. Despite an increasing demand, the Wolfsburg factory might only be able to 400,000 cars this year due to the ongoing global chip shortage. Due to a lack of semiconductor chips, the auto giant has had to slash output at the Wolfsburg factory to the lowest level since the end of the 1950ies, when the capacity of site was half as big.