EMotorad LilE is a compact electric kick scooter that seeks to give a twist to recreational rides.
By : Shubhodeep Chakravarty
| Updated on: 25 Jul 2022, 15:22 PM 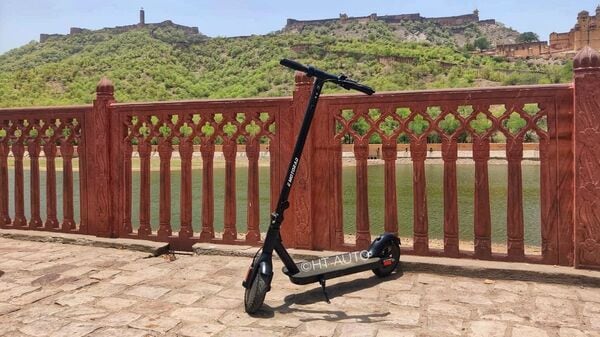 Conventional yet sleek, the EMotorad LilE has a design that is catchy enough to grab eyeballs and yet compact for easy storage.

Kids these days seem to have it all. The latest phones, the snazziest computers and many with the latest gaming consoles as well. But back in the year 2000 when I had just entered my teen years, the means with which to keep oneself occupied were limited only by the vast expanse beyond the house door. My trusty cycle was an engineering marvel - thrown, trampled, rode over craters. It was also something that manifested only after enormous hormone-driven tantrums were thrown. While teenaged tantrums may still exist, cycles and other compact two-wheeled options have evolved enormously over the past two decades or so. This includes kick scooters that were previously a child's fancy but not anymore. With electric power, the kick scooter game has changed dramatically and options here in India too are expanding with passing time. One such option is being offered by Pune-based EMotorad with its LilE electric kick scooter that takes a direct aim at the young and the young-at-heart.

Did you know that kick scooters trace their origins back to the 1920s? A flat board with wheels attached underneath and a stick or box for a handlebar - that's it. But the modern version of the kick scooters we see these days was developed by Honda in Japan in 1974. It had a pedal on a lever but still needed to be kicked. The word and the name has stuck on but today's kick scooters bring down the effort of ‘kicking’ while maximizing the fun.

Interested so far? Then this ride review of the EMotorad LilE is for you: 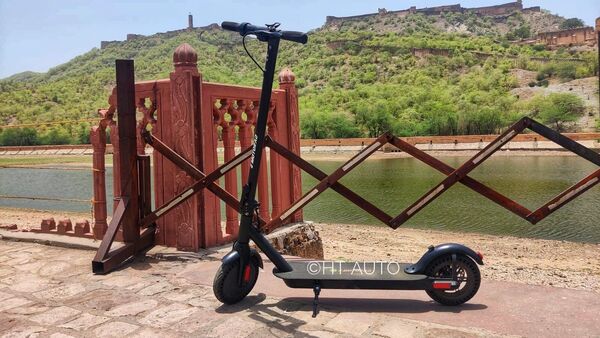 The footboard of the EMotorad LilE is wide enough to accommodate both feet over short distances comfotably.

The LilE - pronounced Little E - is as small and compact as any other kick scooter. Straight out of the box, it is fairly simple to put together. Just unfold the handlebar and connect it to the main board using the four screws provided. And that's it. The wiring for the display and electric motor comes pre-connected.

But while the LilE may have a small footprint and can be folded and packed into tight spaces including car boot areas, it isn't exactly light enough to be carried by children. Whether it is because of the wheels or the electric motor, the unit would require some effort from adults if being carried from one place to another. No carrying handle is another disadvantage.

But flip out the cute little stand and the LilE has a smart profile with its 8.5-inch honeycomb tyres, steel alloy frame, a bright multi-information display screen and front and rear lights. 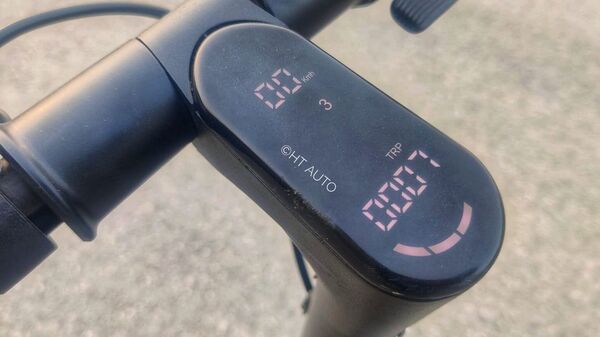 At the top of the screen on the EMotorad LilE is the speed display and just under that is the mode option. The trip meter can be reset while the bar at the bottom shows battery status. Even under direct sunlight, the display has a high degree of visibility.

Pedals are so (day before) yesterday

The LilE may not be featherweight which means you can't just carry it around in public transportation options. But its small footprint does allow you to easily throw it with your luggage in your car for that much-needed weekend trip.

My test unit was not just restricted to the area around my home but was also taken to Amer Fort in Jaipur on a day's trip with family. Needless to say, it managed to steal quite a few eyeballs away from the royal palace.

Powered by a 250W motor, the LilE gets going at the slightest push of the switch on the handlebar. So no need to kick off. And that's great. There are three modes which essentially increase the speed limit with three being the max. In this mode, the LilE easily hits its claimed top speed of 25 kmph on flat or downhill surfaces. On inclines though, the climbing power - on expected lines - comes down.

Another highlight is the rear disc brake on the LilE that is very, very effective. Perhaps too effective. The slightest pull of the brake handle on the left halts the e-scooter and this would take some getting used to. 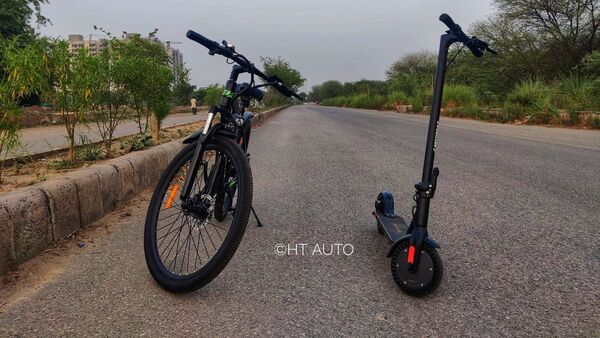 The LilE (right) next to the EMotorad T-Rex+ electric cycle.

On the flipside, I felt LilE could have done with a child lock option that could either disable the operation or at least limit the mode option to keep a check on the speed. This is crucial if you don't want your kids to race around recklessly.

Another thing of note here is that the LilE requires a butter smooth surface to be enjoyed to its fullest potential. Because there's no real suspension at work, even the minutest of road aberrations are felt strongly.

What helps the robust character of this e-scooter though is the steel alloy frame. Riding at around 20 kmph, I did have one incident on Delhi roads where I failed to see a parked car coming out of its lane. To avoid collision, I swerved but lost balance and fell flat on the tarmac. I wasn't entirely fine - bleeding from the elbow - but the LilE only had the faintest of scratch to recount the incident.

The incident may have been entirely my fault and a human error but it does underline the need to be extra, extra cautious on two-wheelers. And this is especially true for all electric kick scooters that can now reach respectable speeds and aren't exactly well-weighted compared to other options.

The best thing about an electric kick scooter is that these are the easiest to charge. Whether you call a bungalow your home or you're up on the 30th floor of a high-rise, the LilE can be easily taken to a charging socket and plugged in for power.

After every ride, I brought the LilE straight into my home using the society lift and plugged it into a convention wall socket. After around four hours, the 7.5 Ah 36V Lithium-Ion was good again for another ride. 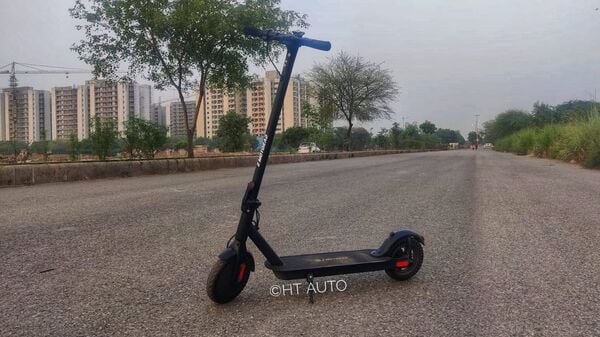 Give it a flat, well-laid road and EMotorad LilE ensures it is more fun than any other two-wheeled option.

And as far as the ride itself goes, the per-charge range of the LilE is claimed to be around 25 kms. I'll admit I didn't test the battery till empty but based on 10-km cycling rendezvous each time for three days, it was clear that on the lowest setting, it can indeed manage the max-range claimed.

In fact, level three on the display won't even be required unless there's a steep incline to negotiate or you're lucky enough to find a freshly-laid road. Under most other circumstances, a top speed of around 15 kmph ought to suffice and therefore allow for maximum range to be extracted.

So who is the EMotorad LilE really for? And who is it not for?

First, the latter. For those who look at two-wheeled option as a mode of transportation or a way to exercise ought to look away. Our weather, traffic and - more often than not - infrastructure conditions won't usually allow the LilE to be used for daily commutes. And because it is battery-powered, there's no physical labour involved and so, no real exercise either.

Instead, the LilE is perfect for leisurely early morning or evening rides. A prefect companion on trips, it can also make for a mobility option in quaint little hamlets on a few days' trip. And because it is as much fun for adults as it is for kids, the LilE truly goes beyond any age barriers.