Automakers in China are increasingly betting on electric vehicles for future growth.Tesla officially opened its multibillion-dollar Shanghai plant this week.Brands such as Mercedes-Benz and Volkswagen are also bringing out electric models.
By : Bloomberg
| Updated on: 09 Jan 2020, 02:29 PM 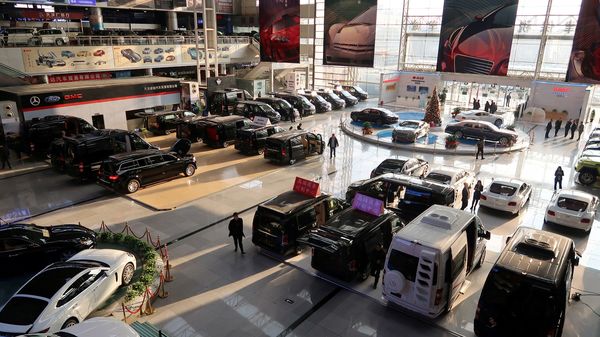 Car sales in China continued to fall in December, capping a second straight annual decline for the world’s biggest market, which is showing few signs of emerging from its historic slump.

Sales of sedans, sport utility vehicles, minivans and multipurpose vehicles fell 3.6% last month from a year earlier to 2.17 million units, the China Passenger Car Association said Thursday. The drop was the 18th in the past 19 months, with the only gain coming last June when dealers offered large discounts to clear inventory. The full-year decline was 7.5%.

Carmakers and dealerships are struggling as a slowing economy and tariff uncertainties caused by trade tensions keep consumers away from showrooms. General Motors Co. said Tuesday sales plunged 15% in China last year and warned pressure on its business will persist in 2020.

The China Association of Automobile Manufacturers, another industry body, last month predicted that vehicle sales will drop 2% to 25.3 million units in the country in 2020, which would be a third straight year of decline.

Global carmakers that have poured billions of dollars into China over the past decades are now forced to reconsider expansion plans. Peugeot maker PSA Group is selling its 50% stake in a joint venture making DS brand cars in China. Suzuki Motor Corp. pulled out of China in 2018.

Local manufacturers are also reeling, with BYD Co. posting a 11% drop in 2019 sales and SAIC Motor Corp. reporting an 11.5% decline. Meanwhile, premium brands such as BMW, Audi and Porsche -- whose customers have been less affected by the economic slowdown -- have weathered the slump better.

At the same time, the global market has undergone one of its worst years ever with carmakers announcing plans to eliminate more than 80,000 jobs, according to data compiled by Bloomberg News. The industry is sputtering as trade tensions and tariffs raise costs and stifle investment, and as manufacturers reassess their staffing in an era of electrification, autonomous driving and ride-on-demand services.

Automakers in China are increasingly betting on electric vehicles for future growth. Tesla officially opened its multibillion-dollar Shanghai plant this week, and brands such as Mercedes-Benz and Volkswagen are also bringing out electric models.

Yet electric-vehicle demand has also sputtered since the government scaled back subsidies last year, leaving consumers assessing whether the higher prices for EVs are worth it.

A majority of China’s EV purchases -- about 70%, according to Sanford C. Bernstein -- so far have been to the government and “policy-direct" customers, including taxis, mobility services and other state-affiliated fleet operators. Some local governments, including Shenzhen, require newly registered ride-hailing cars to be electric.