With Robotaxis still a distant dream, Lidar makes itself useful

Lidar is banking on its low-cost laser-based sensor technology to generate revenue on the long road to full autonomy.
By : Bloomberg
| Updated on: 27 Oct 2020, 08:13 AM 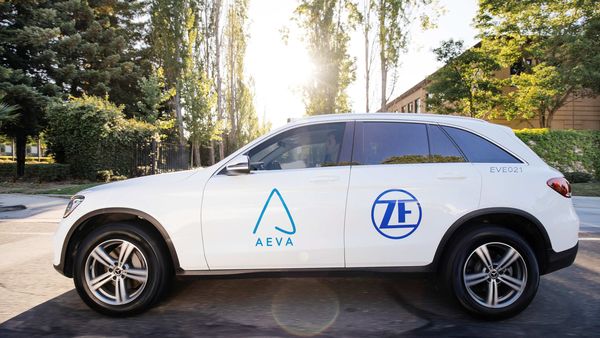 A test vehicle and sensor from California-based startup Aeva that makes lidar sensors to help self-driving vehicles see the road.

The promise of self-driving cars and robotaxi fleets once seemed just around the corner, but reality is setting in. Makers of the underlying technology are pivoting to more realistic ways of making money in the here and now.

Among the most expensive components of autonomous vehicles are laser-based sensors that allow a car’s computer to “see" its surroundings. As automakers push back timelines for introducing self-driving models, companies that specialize in these laser sensors, known as lidar, are targeting more limited features for passenger cars that will go into production in a few years. That’s a shift from the driverless fleets once at the center of manufacturers’ strategies.

Companies are betting they can make this business model work by whittling down the cost of laser sensors, which can reach thousands of dollars. That would make it affordable enough for automakers introducing semi-autonomous features such as hands-free highway driving. Lidar is becoming more familiar to consumers, too, and is a feature of higher-end versions of Apple Inc.’s new iPhone 12.

Lidar startups have raised hundreds of millions of dollars, seizing on demand for high-tech auto investments. Luminar Technologies Inc.’s 25-year-old founder is set to become one of the world’s youngest billionaires when it completes a reverse merger later this year, and Velodyne Lidar Inc. went public via reverse merger last month.

The game plan is to generate revenue on the long road to full autonomy, said Grayson Brulte, who runs a consulting firm in Palm Beach, Florida, focused on autonomous vehicles.“The only way in the current mobility market for autonomy or semi-autonomy to show revenue growth is ADAS," said Brulte, using industry parlance for partial autonomy, or Advanced Driver Assistance Systems. “As higher levels of autonomy mature, then you can start to have that additional revenue growth."

The market for lidar sensors in light-duty vehicles could reach $46 billion in sales by 2030, with much of that going to enable partial autonomy, according to Sam Abuelsamid, principal analyst with Guidehouse Insights, a research company. A lot of that volume will come from makers of low-cost lidar sensors, including Continental AG and radar supplier Ibeo Automotive Systems GmbH, he said.

Innoviz Technologies Ltd., an Israeli startup backed by two of the world’s largest auto suppliers, Aptiv Plc and Magna International Inc., is pitching its latest sensors as a cheaper way for automakers to start phasing in more-sophisticated technology because it allows for upgrades as self-driving systems become more capable and widespread.

Innoviz supplies lidar for BMW AG’s iNext car due in 2021, which will gradually introduce so-called Level 3 autonomy, meaning drivers will be able to take their hands off the wheel and eyes off the road in limited circumstances.

Most self-driving developers consider lidar a critical safety layer that will enable cars to assume responsibility on highways, freeing up drivers to check email or watch a movie. It’s a big leap from Tesla Inc.’s Autopilot or General Motors Co.’s Super Cruise driver-assistance systems, which require motorists to keep their eyes and minds on the road even if their hands are off the wheel.

Tesla, whose CEO Elon Musk famously dismisses lidar, has been gathering self-driving data for years by installing its camera-and-radar-based driver-assistance system on its cars. Last week, Tesla began rolling out a beta version of what it calls “Full Self-Driving" to some of its biggest fans and influencers to try out. Musk plans to charge $10,000 a pop for the package, which Tesla claims is advanced enough to use when driving on busy city streets -- not just on highways.

Tesla didn’t respond to an emailed request for comment.

Despite its name -- and Musk’s promises -- the system does not offer full self-driving. Federal regulators are probing deadly crashes involving Autopilot, and critics have slammed the company for rolling it out prematurely.

Keilaf says Innoviz’s approach would be safer than Tesla’s, because lidar -- which works well in low-light conditions -- would serve as a backup for cameras and radar.

His company’s latest iteration will cost $500 per unit when produced at high volumes, Keilaf said. That is closer to the $40 to $50 per-unit cost for radar sensors and $10 to $15 for cameras, several of which are typically installed on each vehicle, Abuelsamid said.

Luminar, which agreed to go public in a $3.4 billion reverse merger earlier this year, is supplying lidar for Volvo Car AB’s self-driving system that will be installed on cars starting in 2022. Dubbed Highway Pilot, it won’t require drivers to keep their eyes on the road at all times.“It will likely take hundreds of thousands of vehicles to enable autonomy," Luminar CEO Austin Russell wrote in a letter to investors earlier this month. “That scale is exactly what we can deliver with series production on consumer vehicles."

Adding lidar will be lucrative for automakers because they can charge thousands of dollars more for the option of advanced autonomous features, Russell said in an interview.

The industry’s focus on mass-production of passenger cars is a shift from a few years ago, when companies including Innoviz and Velodyne had trained their sights on AV test fleets. Since then, GM has delayed the rollout of its robotaxi service, while Ford Motor Co.’s former CEO said last year that the industry had overestimated the arrival of self-driving cars.

“If you talk to anybody about three to four years ago, everyone was working on this holy grail of autonomy," Velodyne CEO Anand Gopalan said in an interview.

Now driver-assist systems represent about 35% of the projects Velodyne has won or hopes to win in the next five years, while AVs and industrial robots make up about a 20% slice each.

High-tech suppliers may be wise to hedge their automotive bets. With fallout from pandemic-related shutdowns and the looming threat of a resurgence, global vehicle sales will be down 14% this year compared with pre-Covid-19 estimates and 22% lower than expected in 2021, according to LMC Automotive.

“With uncertainties in the marketplace, you may see certain delays," he said. “But we don’t see a loss of appetite for the tech and the goal."