Home Auto News With Id.4, Volkswagen Has Electric Suv That Whispers, Not Shouts

With ID.4, Volkswagen has electric SUV that Whispers, not shouts

Capable, well-equipped, and nice-looking, Volkswagen’s entry into the growing field of electrified utility vehicles will fit in with a lot of families.
By :
| Updated on: 30 Mar 2021, 08:58 PM 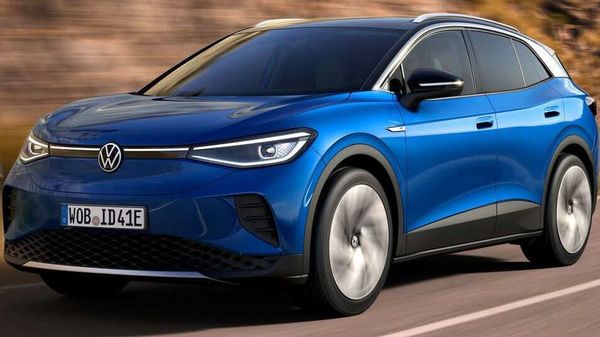 All ID.4 models currently offer only rear-wheel drive, but all-wheel drive models will debut later this year—as will a less-expensive base model.

“We are building EVs for the millions, not millionaires."

That’s how Mark Gillies, the senior manager for product communications at Volkswagen, described the 2021 Volkswagen ID.4 on a video call recently. After all, last year the VW brand sold 5.3 million vehicles worldwide. That’s more than Audi, BMW, and Porsche combined.

After driving the ID.4 for a weekend around Los Angeles, I’m not so sure millionaires won’t like it, too. The first electric SUV from VW will hit the market this spring with futuristic good looks, high-tech driving features, and 250 miles of battery range. While it will never be mistaken for a six-figure electric supercar, with its spacious, airy cabin and satisfactory performance, the ID.4 holds its own.

The Goldilocks of Electric SUVs

Electric vehicles aren’t exactly proliferating in the US They make up just 2% of the units being sold nationwide. And while plenty of companies (Porsche, Audi, General Motors) are making big promises about delivering myriad electrified vehicles within the next decade, it can feel hypothetical and philosophical (and political) at this point.

Still, that doesn’t mean American consumers aren’t curious about them. As I was driving an ID.4 up California’s Highway 101 toward Pasadena on a Sunday, it earned multiple thumbs-up from cars passing by—a rare occurrence for a Volkswagen SUV, non-electric versions of which are ubiquitous in L.A. When I met my indefatigable realtor several times over the course of the weekend, she, a longtime California resident, asked what I thought of it and professed a desire to own one.

We’ve already seen a slew of higher-priced electric vehicles, including the Jaguar I-Pace, Tesla Model X, Audi e-tron, Porsche Taycan, and a few budget-minded ones such as the oblong, awkward-looking Chevrolet Bolt, Kia Niro, and Nissan Leaf. But the VW ID.4 bridges the gap between affordable electric mobility and thoughtful—even elegant—components and design.

I tested the $43,995 “First Edition" variant for four days. This is a special-trim line that comes with larger 20-inch wheels, enhanced “fuel" economy, black badging—and a completely sold-out order book, among other things. (The entry-level “Pro" model will debut later this year, starting at $39,995; “Pro S" models will start at $44,495 and add styling elements, additional creature comforts, and conveniences.)

All ID.4 models currently offer only rear-wheel drive, but all-wheel drive models will debut later this year—as will a less-expensive base model.

The first things I noticed about the vehicle were its lights: Large LED projector headlights and an LED stripe across their top (daytime running lights) gave it an intense but friendly mein. The diamond-patterned headlights were framed by illuminated rings flattened at the bottom.

I drove an ID.4 in Blue Dusk Metallic—six exterior colors, including glacier white and mythos black, are available. If you’re not crazy about two-tone elements on your SUV, look elsewhere for an electric rig: Most variants of the ID.4 include a standard black roof and rear spoiler with C-pillars, roof line, roof rails, and other body accents in bright silver.

The 1st Edition model I drove added unique badging, black mirror caps, and a tow hitch capable of pulling 2,200 pounds. It looks different enough on the road to make close observers take a second look—they can tell this is no Tiguan—but it blends in sufficiently to avert embarrassing commotions at the grocery store or while waiting in line to get vaccine.

Inside the five-seat crossover felt economic but well-made. Most notable was the 10-inch touch infotainment display in the middle of the dash panel, which angled slightly toward me; the traditional gearshift was replaced by a large rocker switch on the right. There was also a floating dashboard panel—floating because it was not connected to the center console—with a long center console running between the front seats.

An optional panoramic roof stretched across the ceiling; the electric sunshade saved my New York-pale skin from L.A.’s glaring sun. The rear bench seat is durable enough to withstand a German Shepherd but comfortable enough for a nap (don’t ask how I know) and includes two USB ports and an illuminated wireless cellphone charging pad.

Storage space in the rear exceeds 64 cubic feet of cargo volume with the seats down, more than 10 cubic feet than an Audi A5 offers.

I especially liked several innovative features that come standard and make this VW feel like a premium SUV: heated steering wheel, heated front seats, heated side mirrors and washer nozzles, and—on all-wheel-drive models—a heated windshield to keep it from steaming up. The ID.4 also has an electric resistance heater designed to reach the desired temperature faster than traditional heaters from gas-powered vehicles, which blow cold air until the engine has warmed. This would come in handier in New York than in L.A., but I liked knowing it was there.

Sitting in the driver’s seat reminded me of being in the VW Jettas and Golfs that the wealthier kids had at my high school. VW has made its most progressive vehicle feel reassuringly familiar.

With a rear-mounted motor that gets 201 horsepower and 229 pound-feet of torque, the ID.4 won’t win any drag races—zero to 62 mph takes 8.5 seconds, and top speed is staggeringly slow at less than 100 mph.

The four drive modes (Eco, Comfort, Sport, and Custom) proved effective for saving battery range though not for somehow magically boosting this beast into anything approaching “fast." Still, it drives smoothly enough, offers good 360-degree visibility, and will save fuel money. The Environmental Protection Agency estimates its economy at 104 MPGe for city driving and 89 MPGe for highway driving. The combined city and highway driving figure is 97 MPGe.

I do think, by the way, that consumers mulling the realties of owning an electric vehicle need some reassurance regarding range anxiety—still the biggest reason they won’t take the plunge.

The ID.4 does have nearly 250 miles of charge, even under aggressive highway driving, and it charges to 80% on a 125-kW DC fast charger in just 38 minutes. But while the average VW owner drives less than 59 miles a day, according to Gillies, there are still days when you want to drive to see grandma after a year of social distancing, and you’re not going to want to have to sit in some parking lot waiting for your car to charge on the way home.

For many, that makes the ID.4 an excellent second family car for urban commuting and regular use. As for those long-trip days, it’s still best to take another car.