Dhoni's IPL franchise Chennai Super Kings has shared a video of the former Indian captain driving a Swaraj 963 FE tractor at his farmhouse in Ranchi.
By : Sabyasachi Dasgupta
| Updated on: 06 Jun 2020, 16:49 PM 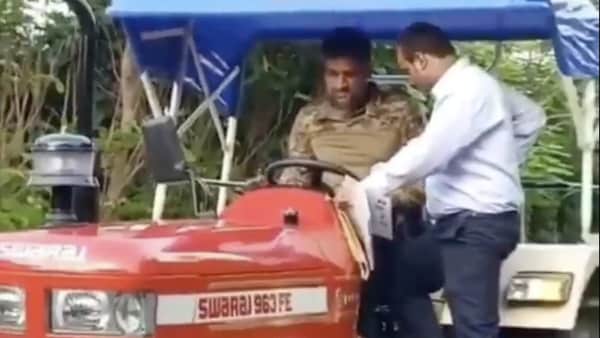 IPL franchise Chennai Super Kings has shared a video of its captain MS Dhoni driving a tractor. The video, already watched by nearly 80,000 users on Twitter, has a background music composed by Ilaiyaraaja for Tamil film Mouna Ragam.

Dhoni has reportedly bought this tractor, the Swaraj 963 FE, to drive around his sprawling 7-acre farmhouse in hometown Ranchi. The former Indian captain has been reportedly into farming during the 3-month long lockdown due to Covid-19 pandemic. Despite having a number of expensive cars, SUVs and bikes, Dhoni decided to pick this tractor for the commute.

In the video, Dhoni can be seen driving the tractor while another person sits next to him, possibly briefing about the features of the vehicle.

The Swaraj 963 FE is one of the flagship models for Swaraj Tractors. It is powered by a 3478cc three-cylinder 4-stroke diesel engine and can produce 44.74-48.47 kW (60-65 hp) of power. It also has power steering and a digital instrument cluster.

Dhoni, an avid biker, already has a collection of a number of motorcycles such as Yamaha RD350, Ducati 1098, Kawasaki Ninja ZX-14R and Confederate X132 Hellcat among others. Besides bikes, Dhoni also has an enviable collection of cars and SUVs ranging from a Hummer to Jeep Grand Cherokee.

Shortly before Chennai Super Kings shared the video, Mahindra and Mahindra had reported that it is counting a loss of more than 30,000 tractors in the first quarter of FY 2020-21 due to extended lockdowns. However, the company hopes the rural sector to drive demands for tractors sooner than the urban market picks up.