The roof of what appears to be a BMW vehicle has been completely flattened and its broken glasses expose the entire cabin inside.A pair of Porsche SUVs can seen with deformed hoods, completely covered in sand and rubble.
By : HT Auto Desk
| Updated on: 04 Jan 2021, 02:18 PM 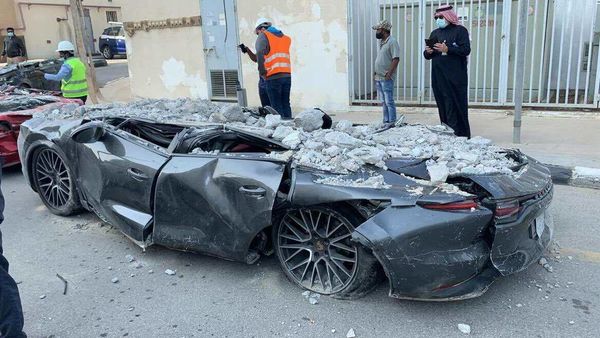 Imagine a parking area filled only with wrecked and obliterated vehicles - roofs smashed, glasses broken, number plates fallen, doors broken, just some of the many more things to be noticed of the wreckage. The imagination is not pleasant at all.

A recent video posted on Twitter by a resident of Saudi Arabia shows a parking lot exactly like described above. The video shows rescue teams inspecting damaged vehicles that have been recovered from a parking lot collapse in the city of Khobar, that took place in October last year. Trailers can be seen carrying recovered wrecked cars and placing them on the ground next to other such vehicles.

The roof of what appears to be a BMW vehicle has been completely flattened and its broken glasses exposs the entire cabin inside. A pair of Porsche SUVs are seen with deformed hoods, completely covered in sand and rubble. Many car models have been damaged to such an extent that they are no longer recognizable. Some last letters hanging onto the badge of a car reveals that is a Porsche Cayenne.

Various other vehicles that probably were closer to the epicentre of the collapse are wrecked beyond repair. Their suspensions collapsed, wheels broken, body flattened, cabin filled with rocks, have rendered them unrecognizable.

A video of the October incident has been posted on YouTube.

According to a report in Saudi24News, no causalities were reported due to the collapse of the parking tower. However, the reason for the incident is unknown.