Watch: Vehicle hops over multiple other cars and lands right into parking spot

A video posted on Reddit shows the vehicle moving at a high speed before it loses control, hits the sideways and then launches up in the air.
By : HT Auto Desk
| Updated on: 11 Apr 2022, 11:58 AM 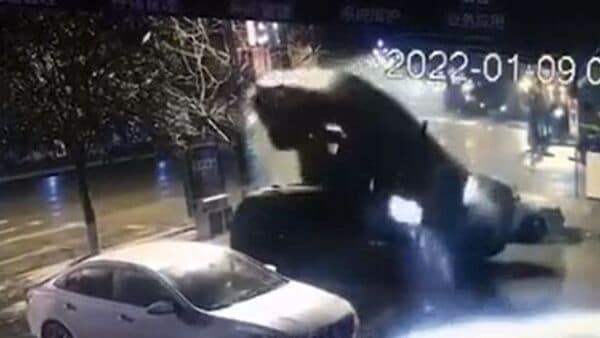 Screenshot of a video posted on Reddit by r/Unexpected

A security footage in Chongqin, China has captured a vehicle going out of control, launching into air, and hopping over multiple parked cars before finally landing into a parking spot. Interestingly, the car manages to secure a perfect landing spot and quite quickly, but at the expense of just about everything in sight.

The video posted on Reddit shows the vehicle moving at a high speed before the tail gets loose, and the vehicle hits the sideways and is then launched up in the air. It flies past three other parked vehicles, hitting one of them, before it finally manages to come to a stop and land in the empty parking position. The car that was hit by the driver turns sideways while a pedestrian crossing the road sees a narrow escape.

The video has garnered a lot of attention on Reddit and the driver of the vehicle is being called the ‘master of parking’ for having managed to secure a perfect parking spot in seconds. Netizens are calling it a scene from an action movie and a move just ‘like a glove’. One social media user commented, “Parking Master achieved," while another said, “just the right place. phew."

However, It is not clear whether the motorist responsible for the incident was apprehended by the police or not, or if anyone was actually hurt during the series of events.