A video has surfaced that shows a Tesla EV dashing into a parked police vehicle and it is being alleged that the driver was watching movie on the phone while putting the electric car on Autopilot mode.
By : HT Auto Desk
| Updated on: 20 Feb 2022, 12:50 PM 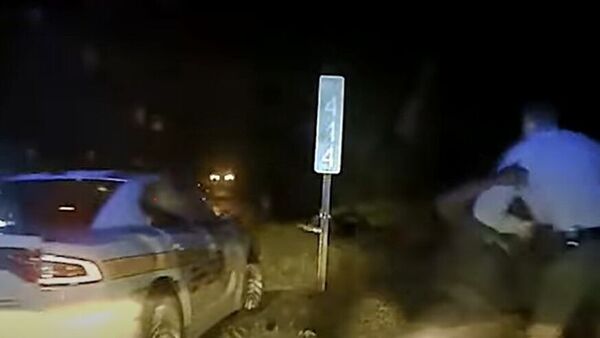 Screengrab taken from the video posted on YouTube by FSAction9.

Officials of North Carolina have recently released a dashcam recording that shows a Tesla vehicle being driven on Autopilot mode and dashing into a parked police vehicle on the side of a highway road. The video has been posted on YouTube and has received numerous views.

From the video, one can see that following the impact an officer from the North Carolina State Highway Patrol pushes another officer out of the electric car's way to safety and meanwhile the Tesla EV goes ahead and slams a mile marker on the side of the road and then rolls down a grass embankment.

As per a report by Carscoops, Nash County Sheriff Keith Stone stated that the accident could have turned horrific. “Luckily, the state trooper pushed our deputy out of the way when he heard the tires squeal, and in an instant, we could have lost a life or several lives," added Stone.

The report also stated that the model involved in the crash was Tesla Model S and it was being driven by a doctor named Devainder Goli. It is being alleged that the individual was watching a movie on the phone at the time of the accident that took place in August 2020. The incident occurred while the officers were already investigating a different case of an accident. The mentioned person was later charged with distracted driving and not moving over for an emergency vehicle which also resulted in an arrest.

Last year in September, a similar incident took place in Florida where a police vehicle was hit by a Tesla Model 3 EV at its rear while the officials parked their vehicle to help another driver.