Nine tourists died after heavy boulders from the landslide fell on their tempo traveller.Roofs and bonnets of the vehicles that bore the brunt of the landslide have been crushed.
By : HT Auto Desk
| Updated on: 26 Jul 2021, 11:50 AM 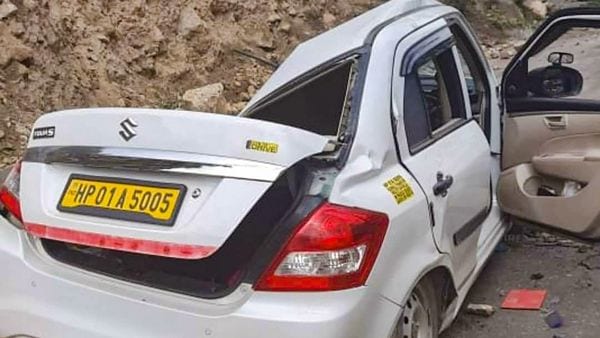 A damaged car after a landslide at Batseri of Sangla valley in Kinnaur district.

A massive landslide near Basteri in Kinnaur district of Himachal Pradesh on Sunday caused heavy boulders to fall on the nearby vehicles including a tempo traveller, leading to nine tourists being killed and two others being injured. The landslide, that was triggered by the recent rainfalls, damaged some vehicles and caused a bridge to collapse.

A video footage of the boulders falling and the bridge collapsing has gone viral on social media. In the video, one can hear people shouting as they see boulders rolling down the hills. Several heavy boulders fall into the river while some fall on the ground where many cars can bee seen parked. Succumbing to the impact of the boulders, the bridge on the river can be seen breaking from the middle and collapsing.

Vehicles that bore the brunt of the falling boulders have been crushed from multiple angles. Their roofs and bonnets have been pressed due to the pressure from the boulders while their glasses have been broken. According to the police, the nine people were killed after heavy boulders fell on their tempo traveller. The passengers were on their way to Sangla from Chitkul. 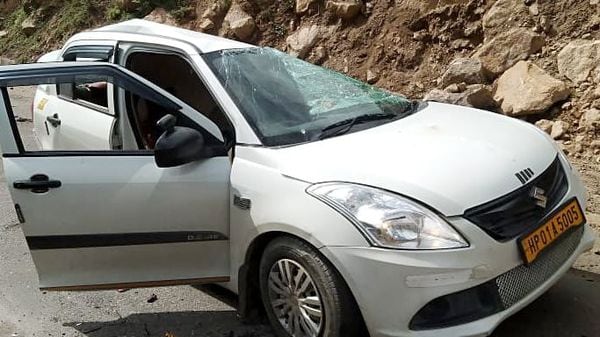 A Swift Dzire car was damaged after being hit by boulders caused by heavy rainfall, at Sangla-Batseri road, in Kinnaur. (ANI)

President Ram Nath Kovind and Prime Minister Narendra Modi expressed condolences over the death of people due to the landslides. Modi also announced an ex gratia of ₹2 lakh each for the next of kin of the deceased people from the Prime Minister's National Relief Fund and ₹50,000 for the injured. Those injured are being treated.