Watch: Kia EV6 turns into ball of fire after crashing in Hungary 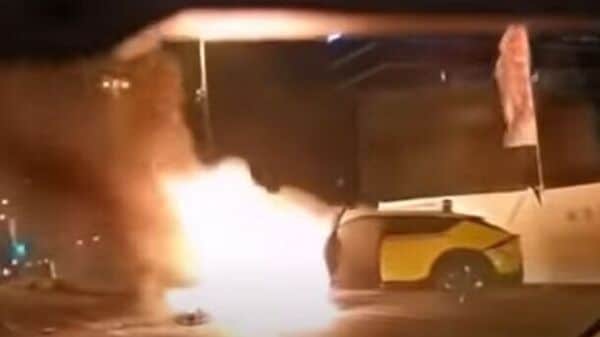 Screengrab of video posted on YouTube by Villanyautósok shows a Kia EV6 burning.

A Kia EV6 electric car blew up in flames in the middle of a street in Budapest, Hungary after it met with an accident. The incident occurred when the driver was going through downtown Budapest and happened to hit an apparent concrete barrier that was in the lane, Insideevs reported.

Soon after the accident, there was a fire spark in the electric vehicle which lead to the blowing up of the front part of the car. Unfortunately, the driver was injured and was rushed to a hospital, the report said citing a source.

It couldn't be ascertained if the vehicle was a rear- or all-wheel drive EV6. The report stated that if it is an all-wheel drive model, then the impact of the crash in the front of the vehicle may have damaged the electrical conduits that the high voltage cables needed to power the front motor are run through. If it was a rear-wheel drive model, the risk of a frontal impact causing a fire would have been low as there is no second motor in such a case. However, these are only assumptions and the real reason of the fire isn't yet known.

A video of the burning Kia EV6 has emerged on YouTube where the electric car seems like a ball of fire, at least with the front portion totally covered in the flame. While the blaze does seem to be concentrated on the front of the EV, it isn't apparently coming from underneath the vehicle. It could mean that the battery of the EV was yet to catch fire or that only the front modules had been affected when the video was being shot.

The fire incident of Kia EV6 brings to fore the debate about electric vehicles being more prone to catching fire upon accidents. While some studies have stated that ICE engines are more liable to catch fire, EV batteries surely have the potential to spark up any fire, the report said, referring to the EV6 incident in Hungary.