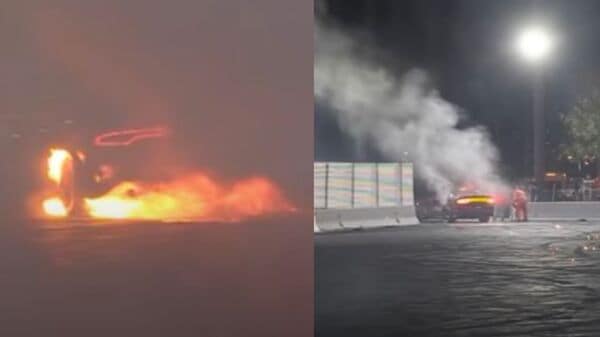 Screenshot of a video posted on YouTube by SoCal Supers

While Dodge Hellcat vehicles are famously known as tyre-shredding machines, one Hellcat owner literally pushed the limits of the machine while performing a burnout, leading the Hellcat to catch fire. The incident occurred at Irwindale Speedway in California where a car meet was being held and vehicles were showing stunts.

In the first half of a video posted on social media, the said Hellcat Charger can be seen doing donuts for about two minutes straight before it eventually starts holding the burnout in one place. That was what actually turned out to be a mistake as a few seconds later, the rear of the car nearly blew up and caught fire.

However, it still is unclear as to why the Hellcat Charger exploded the way it did, but most people are speculating that either the tyre burst by itself or possibly ignited another flammable substance. Thankfully, no spectators were hurt as the car meet’s organizers had set up an enclosure for people to do their stunts in.

In the second half of the video, the Dodge Hellcat surprisingly appears again and seems to have suffered little to no structural damage. That being said, it is, however, still charred to a crisp. The owner drove it home, and could be seen revving the engine on exit.