The dirt bikes and ATVs that have been bulldozed were reportedly uninsured and often stolen.
By : HT Auto Desk
| Updated on: 23 Jun 2022, 06:29 PM 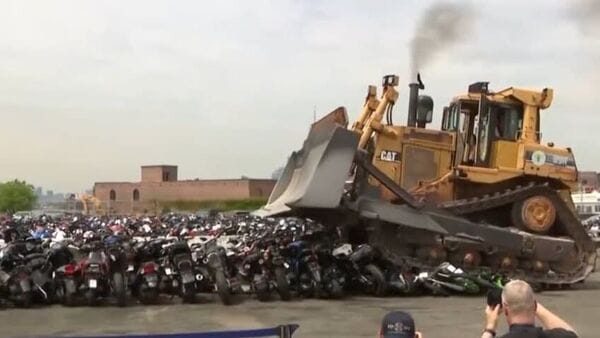 Screengrab from the video of destruction of dirt bikes. (Image: Twitter/Reuters)

New York City Mayor Eric Adams ordered the destruction of hundreds of illegal dirt bikes and ATVs in the city that were seized during an enforcement campaign in an attempt to curb the nuisance of off-road vehicles that were being driven in swarms on city streets. The city administration bulldozed these seized dirt bikes and ATVs, many of which were uninsured.

The New York Mayor said that during the enforcement campaign around 900 bikes and ATVs were seized. Nearly 90 per cent of them were seized in 2021. He also said that majority of them were undocumented and often operated by uninsured drivers. These vehicles are often stolen from surrounding suburbs and gangs driving the ATVs or dirt bikes used to terrorize the locals in the city.

The Mayor said that many of these biked don't have insurance. “If they strike someone, the person is left with medical costs and other out of pocket expenses. So we're going to keep doing our part," he further added. He also reportedly said that the highway patrol and other enforcement agencies will work together to curb the menace of uninsured bikes roaming around the city.

Reuters has published a video on Twitter showing how the New York city administration used a bulldozer to destroy the dirt bikes and the ATVs that have been seized.