Home Auto News Watch: Helmet Saves This Rider's Head After It Ends Up Under Bus Wheels

Watch: Helmet saves this rider's head after it ends up under bus wheels 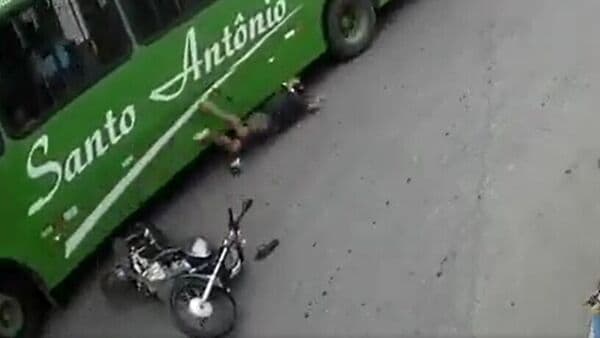 A helmet is not an accessory but a necessity while driving a two-wheeler and this goes out to all those who often take this life-saving headgear for granted. A video that shows an accident involving a rider whose head was saved by the helmet after it ended up under the rear wheels of a bus has surfaced on the internet and it has garnered more than three million views.

The incident was captured on a safety camera which showed an individual driving his bike in the opposite direction of the bus. The person was trying to manoeuvre and avoid the bus when suddenly he went flying from his bike's seat and fell under the bus. The rear wheels of the bus almost squeezed the rider's head, however, the helmet that he was wearing came to his rescue. One can clearly make out from the video that the absence of the helmet would have led to a fatal conclusion.

One can note in the video as soon as the driver of the bus pushed the brakes, the rider slowly took out his head from under the wheels. A few bystanders came to his rescue and helped him to stand up and also lifted his bike. The video has been retweeted more than 12,000 times and attracted around 1,31,000 likes. Many retweeted this video by stating that this video has shocked them to the core. A few also shared it by stating how important is helmets for bike riders and this accident should be taken as a lesson for many who ride two-wheelers without their helmets.

In March, this year, Minister of Road Transport and Highways Nitin Gadkari said that in 2020, more than 1.58 lakh accidents involving two-wheelers occurred. Deaths due to two-wheeler-related accidents increased from 56,136 in 2019 to 56,873 in 2020. Despite making helmets a mandatory gear while riding a two-wheeler, many across the country fail to comply with it.