Fortunately, no one was harmed in the incident where the Ford Mustang hit the power pole and got stuck upright there.
By : HT Auto Desk
| Updated on: 31 May 2022, 07:46 AM 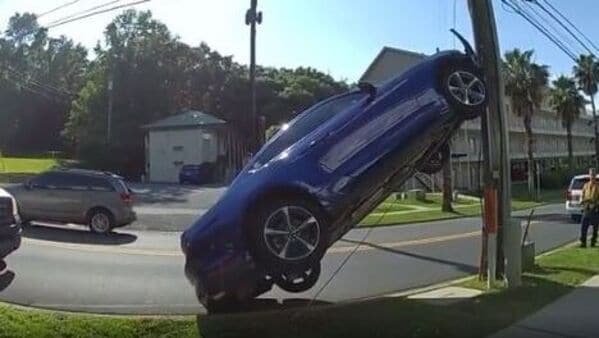 A CCTV footage showing a Blue Ford Mustang pony car in an unconventional position has surfaced on the internet. Posted by the Tallahassee Police Department, Florida, the video shows the aftermath of the Mustang that was being driven by a man in an intoxicated state. The pony car seems to have climbed up the power pole and got stuck there in an inclined position.

Listing all the things that could happen to someone driving while drunk, the Tallahassee police department said in the post, “Not only could you be featured on our social media like this guy, you could get arrested, physically harm yourself or others, or end someone’s life. Oh, and you could also end up wrecking your shiny new Mustang."

Yet, one could wonder how exactly did the driver get out of his Mustang while leaving it fixed in that upright position. Another video that surfaced on Reddit answers exactly that. The video shows the guy opening the door and angling down to jump on the lane. He luckily got out of the upright vehicle without a single scratch.

Notably, the angle of the accident suggests that he was driving straight towards the pole and the wires seems to have taken much of the energy out of the vehicle, which could have otherwise been directed at the wooden pole. If that would have happened, there would have been chances of a head-on collision.