Home Auto News Watch: Cng Bus Bursts Into Dramatic Flames. And No, It Is Not In India

Watch: CNG bus bursts into dramatic flames. And no, it is not in India 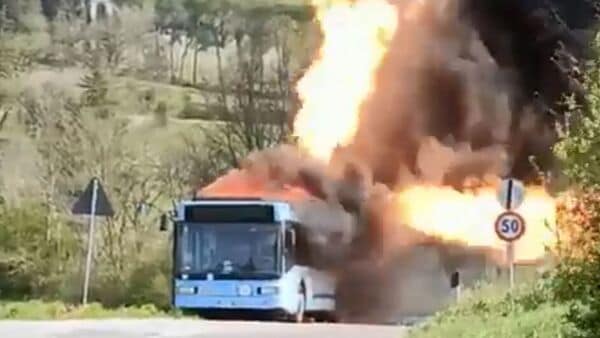 The city bus was not carrying any passengers at the time of the incident and the driver managed to escape to safety. (Screenshot from video posted on Twitter by @KiwiEV

Compressed Natural Gas or CNG is fast emerging as a viable alternate source of fuel with the promise of far lesser detrimental impact on the environment than completely petrol or diesel alternatives. But while no one particular fuel source can claim to be entirely safe scenes of CNG vehicles ablaze hardly help the cause of this alternate fuel. Technology has improved by leaps and bounds over time and progress has made CNG far safer than ever before but even still, a dramatic video clip showing a bus on fire and bellowing flames from three sides has gone near viral on social media channels.

According to reports, the incident was reported near the Italian city of Perugia earlier this month when a city bus powered by CNG caught fire. A video clip shot and shared online showed how flames burst out of the bus from three sides in what has also been described by many as a scene straight out of Mad Max. But while there were plenty of casualties in the blockbuster movie, in this incident - and thankfully, no one was injured. It is reported that only a mechanic was behind the wheel at the time of the incident and he managed to safely evacuate from the bus before calling authorities for assistance.

Now, I'm no busologist, but shouldn't the combustion be internal? #CNG pic.twitter.com/QaBIZa3PO8

The flames were eventually doused but the bus is beyond the scope of any repair. Needless to say, the vehicle wore an completely decimated look with even the road layering around it having melted from the sheer heat. What caused the fire to break out is a matter of investigation but the video clip shows evidence that the pressure-reducing valves let the fuel burn without any blast. An explosion, even in a seemingly deserted area, could have have caused more damage than what was eventually suffered.