The range optimiser in the new in-car app on Volvo XC40 Recharge will adjust the climate system of the vehicle automatically so as to improve its driving range.Volvo Cars will also pre-install the app in the C40 Recharge models during production.
By : HT Auto Desk
| Updated on: 19 Oct 2021, 05:32 PM 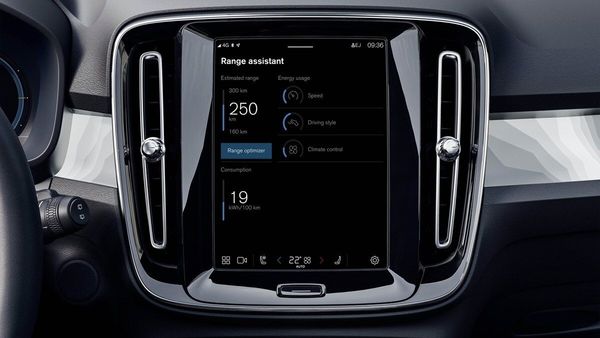 Volvo Cars will continue developing the app ahead of its full release by adding additional features.

Volvo Cars has rolled out new Range Assistant app for its fully electric XC40 Recharge models via an OTA (over-the-air) update in order to maximize its driving range. The in-car app has been released in a beta version as of now for Volvo cars with an infotainment system powered by Android Auto.

The drivers of XC40 Recharge will also witness an increased range with improvements in smart battery management and regeneration performance of the vehicle as well as a smarter timer that can pre-condition the batteries. The Range Assistant app will help drivers keep a track of the available range of their vehicles and maximize it through smart energy management. It will also give advice on driving style in order to increase the efficiency of the vehicle's drive dynamics.

The range optimiser in the app will adjust the climate system of the vehicle automatically so as to improve its driving range. This feature is touted to be especially useful on longer trips as it will reduce the requirement to stop at charging points.

Volvo Cars will continue developing the app ahead of its full release by adding  additional features such as coaching of drivers with smart and easy-to-follow recommendations. These will guide the drivers on how to adjust driving style and speed in order to optimize the range. The automaker will also pre-install the app in the C40 Recharge.