Volvo will reveal its XC90, that is its fully electric SUV, in 2022.Volvo says the new safety package will make its cars safer, personal and sustainable over time.Volvo also adds its long-term aim is to avoid accidents altogether.
By : HT Auto Desk
| Updated on: 27 Jun 2021, 10:29 AM 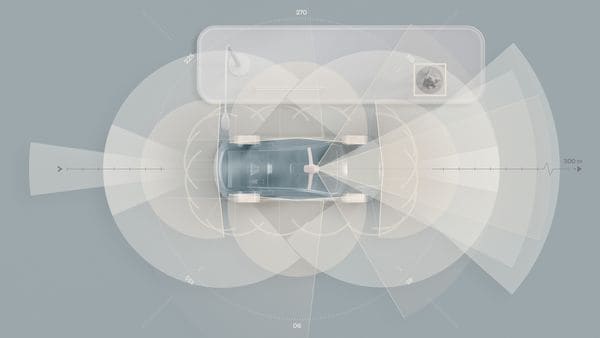 Volvo Cars has announced that its forthcoming fully electric SUV, XC90, which will be revealed in 2022, will come with state-of-the-art sensors which will include LiDAR technology. Earlier this year, the company had also revealed that it will use NVIDIA technology for its centralised computing system. This technology will be used in both its core and autonomous drive computer to make Volvo cars safer, personal and sustainable over time.

With Volvo focusing on the hardware whereas Zenseact and Luminar taking care of the software part, the Scandinavian automaker wants to reduce accidents and fatalities with the upcoming safety package. Chief executive Håkan Samuelsson said that Volvo cars have always been the leader when it comes to safety.“By having this hardware as standard, we can continuously improve safety features over the air and introduce advanced autonomous drive systems, reinforcing our leadership in safety," he added.

The new safety package will reduce collisions and the reduction rate is expected to increase over time via over-the-air software updates, said the company. Volvo also added that its upcoming XC90 will have backup systems for key functions apart from the sensor suite and AI computing performance. This will include steering and braking that will make it ready for safe, unsupervised autonomous driving.

Chief technology officer Henrik Green said that the ambition of Volvo in the long term is to achieve zero collisions and avoid crashes altogether. “As we improve our safety technology continuously through updates over the air, we expect collisions to become increasingly rare and hope to save more lives," he said. Once introduced, the technology is expected to mature over time, by allowing the car to assist and improve the capabilities of a driver in critical driving condition. Volvo Cars said that more details of this technology will be revealed at the Volvo Cars Tech Moment to be held on June 30.