Volkswagen operates factories in 20 European countries, including Italy, Hungary and Spain.They are intertwined through complex supply chains and employ 470,000 people of a global workforce of 670,000.
By : Bloomberg
| Updated on: 27 Apr 2020, 09:34 AM 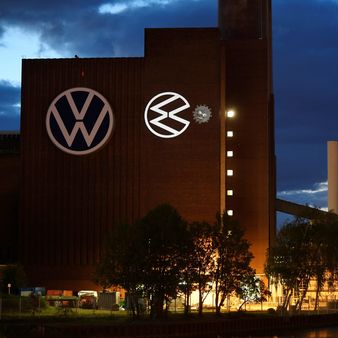 FILE PHOTO: A cartoon of a VW logo squashing the coronavirus is displayed on a building at Volkswagen's headquarters to celebrate the plant's re-opening during the spread of the coronavirus disease (COVID-19) in Wolfsburg, Germany.

Volkswagen AG is restarting output at its Wolfsburg car plant, the world’s biggest, with a labor leader’s warning that political fallout from the coronavirus pandemic could be more harmful than production disruptions.

The world’s largest automaker is gradually ramping up production in Europe after operations in China have almost returned to pre-crisis levels. VW’s German electric-car site in Zwickau and a factory in Slovakia started to make cars again last week after the Covid-19 outbreak halted output last month.

If political cooperation within the European Union stalled and the bloc’s single market disintegrated, the consequences would be dire, Osterloh said in an open letter sent to politicians across the region in recent days.

“We fear that Europe would no longer awake from such a state of double paralysis," Osterloh said in the letter. “The foundation of our success, our jobs and our native regions would vanish irreparably."

While China is VW’s largest sales region, the European market is critical to its success. The company operates factories in 20 European countries, including Italy, Hungary and Spain. They’re intertwined through complex supply chains and employ 470,000 people of a global workforce of 670,000.

The European Central Bank and governments have rolled out unprecedented aid packages to prevent economic meltdown, but talks over which funds should be tapped to fuel a broader economic recovery have sparked controversy.

“It is the freedoms of the European single market and its strength on the world stage that make us globally competitive as the EU," Osterloh said. “In these difficult times, Germany in particular is noticing more intensely than it has for decades that our economy is not viable within national borders."

Wolfsburg, which is adjacent to VW’s corporate headquarters, employs 50,000 people and churned out slightly more than 700,000 cars last year, almost twice as many as Tesla Inc.’s global deliveries.