Delhi and adjoining cities went under as strong rainfall once again exposed the shoddy work done by civic authorities to keep roads free from waterlogging.
By : HT Auto Desk
| Updated on: 13 Aug 2020, 04:26 PM 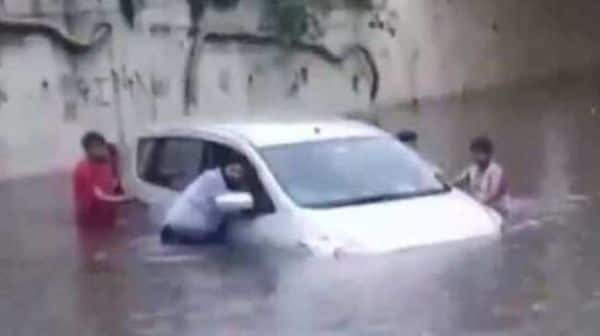 People try to push out a vehicle from a submerged road near Zakir Nagar in Delhi. (Photo: Screengrab from video posted by @ANI)

Boats and ships usually capsize but on Delhi streets on Thursday, it was the turn of vehicles to float - some even going under - as heavy rainfall throughout the morning hours left many parts of the city and adjoining areas completely submerged.

The shambolic state of civic apathy in the national capital was brazenly visible to all as commuters had a harrowing experience in many parts due to the water-logging situation. While those on foot were the hardest hit, people in cars and on two-wheelers too were hardly any better. Severe water-logging was reported in areas such as Tughlakabad, Zakir Nagar, ITO, Dwarka, among many other areas.

#WATCH Delhi: People crossing a severely waterlogged road on a bullock cart in Tughlakabad area, fall into the water. pic.twitter.com/TLFRqgIPxD

A private bus gets stuck under a waterlogged bridge in #Delhi's Tughlakabad area. A proclainer has been brought to the site to pull out the bus. pic.twitter.com/5VMz6OB2xs

#WATCH A car partially submerged at a waterlogged underpass in Zakir Nagar area of Delhi. pic.twitter.com/LiNiGUn29o

Scenes of people getting out to push their vehicles due to water-related malfunction were a common sight through the day.

And adjoining satellite cities of Gurugram, Ghaziabad, Noida and Faridabad hardly fared any better with the grey sky painting an even darker picture at ground level.

India Meteorological Department has predicted "generally cloudy sky with a few spells of rain or thundershowers" in the district today. pic.twitter.com/SgT0fSrtwS

The Met department had already predicted moderate rainfall in Delhi and adjoining areas in the early hours of Thursday. The persistently strong showers caught many unawares and - as always - exposed the callous nature of work done by civic authorities.