US carmakers plead government to help in growing chip crisis

The shortage forced Ford to shut a sport-utility vehicle factory in Kentucky this week, and it is closing a small-car plant in Germany for a month.Fiat Chrysler has had to temporarily stop output at plants in Mexico and Canada.
By : Bloomberg
| Updated on: 16 Jan 2021, 10:52 AM 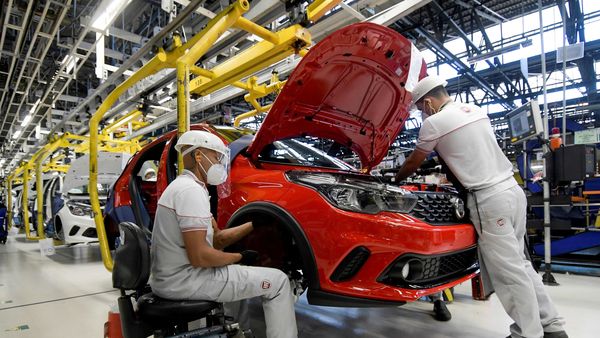 FILE PHOTO: Fiat Chrysler Automobiles assembly workers build a 2020 Argo, amid the spread of the coronavirus disease (COVID-19), at the Assembly Plant in Betim near Belo Horizonte, Brazil, May 20, 2020. REUTERS/Washington Alves/File Photo

American automakers are asking the US government to help solve a debilitating shortage of computer chips that is closing auto factories worldwide and could restrict production until the fall.

The American Automotive Policy Council -- a lobbying organisation for General Motors Co, Ford Motor Co and the US operations of Fiat Chrysler Automobiles NV -- is agitating with the US Commerce Department and the incoming administration of President-elect Joe Biden to press Asian semiconductor makers to reallocate output away from consumer electronics and build essential chips for cars.

“We have requested that the US government help us find a solution to the problem because it will diminish our production and have a negative impact on the US economy until it’s resolved," Matt Blunt, president of the AAPC, said in an interview Friday. “We are not primarily concerned with where blame may lie for this global shortage, if it lies anywhere, but we just want a solution. And the solution is more automobile-sector semiconductors."

The shortage forced Ford to shut a sport-utility vehicle factory in Kentucky this week, and it is closing a small-car plant in Germany for a month. Fiat Chrysler has had to temporarily stop output at plants in Mexico and Canada. More production is expected to be idled in the coming weeks.

Fingers of blame have been pointing in both directions, with chipmakers saying the auto industry brought this shortage on itself by reduced orders too sharply when the pandemic hit last year. Automakers and their suppliers, though, point to the chipmakers prioritising consumer electronics because margins are fatter on those devices and demand for them boomed as more people stayed home during virus-related shutdowns.

The more the dispute drags on, the more it will hurt the US economy, Blunt said. Since it takes chip manufacturers at least three months to ramp up production, the affect on auto factories will linger deep into 2021.

“Even if you solve this today, you’d have an entire quarter that’s going to be impacted," Blunt said. “So it’s really going to have an impact through the first half of this year. And the longer it takes to resolve, the more it will bleed into the third quarter."

Blunt, 50, the former Republican governor of Missouri, said he has begun “nascent" discussions with the Biden administration, which he hopes will put the chip shortage near the top of its to-do list.

“There are lots of people in the incoming administration that have some automobile experience and expertise, and certainly lots of folks understand, including the president-elect, how important the industry is to the United States," Blunt said. “So we’re hopeful it will be a priority for them to help us resolve as soon as the president is inaugurated."