TVS Motor Company has concluded the fourth edition of TVS AOG South Chapter ride in the picturesque city of Mangalore, Karnataka.
By : HT Auto Desk
| Updated on: 13 Apr 2022, 11:52 AM 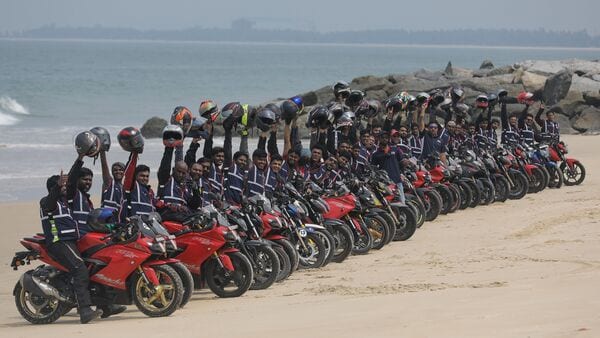 TVS Apache customers rode down from across the length and breadth of the country to participate in the latest AOG South Chapter ride event.

TVS Motor Company recently announced that it has concluded the fourth edition of TVS AOG South Chapter ride in the picturesque city of Mangalore, Karnataka. The event took place between April 8 and April 10 and witnessed participation of over 120 TVS Apache owners. The company added that the Apache customers rode down from across the length and breadth of the country to participate in the latest AOG South Chapter ride event.

While the first day of the event saw the riders taking part in adrenaline gushing motorsport activities, day two of the South Chapter began with a group ride to the scenic Maravanthe beach.

Only recently, the company also announced milestone of one lakh members in the Apache Owners Group (AOG) with the North Chapter ride in Mandawa, Rajasthan.

“TVS Apache Owners Group (AOG) is a community of passionate and like-minded TVS Apache riders sharing a common platform to explore and spread their enthusiasm for motorcycling. After four years of its journey, AOG is now present in 65 cities across India having over one lakh members. Riders in the TVS AOG community have completed over a thousand rides till date," the company said in a press note shared recently.

This event is exclusive for TVS Apache owners in India. The company retails a range of models in its popular ‘Apache’ lineup including the Apache RTR Series, Apache RTR 165RP and the flagship Apache RR 310. The latter is among one of the most popular fully faired sport bikes in the Indian market.