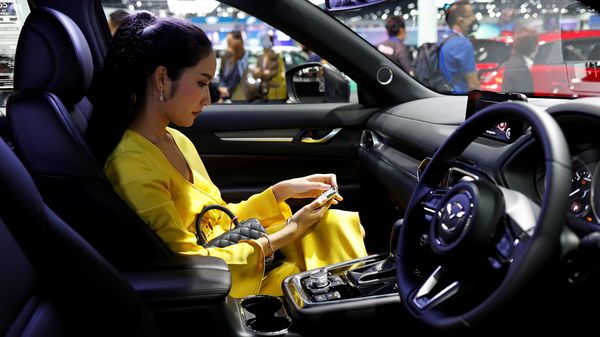 File photo - A customer sits in a Mazda CX-8 during the media day of the 41st Bangkok International Motor Show. Mazda will make crossover vehicles at its new plant in Alabama where it will share space with Toyota. (Image used for representational purpose)

Toyota Motor Corp and Mazda Motor Corp said on Thursday they will invest $2.3 billion (1.76 billion pounds) in a new joint venture factory in Alabama, $830 million more than announced in their original plan in 2018.

Production is expected to start next year building up to 150,000 future Mazda crossover vehicles and 150,000 Toyota sport utility vehicles annually. The Japanese automakers are expected to receive $97 million in additional tax incentives for the added investment, a person briefed on the matter said.

The automakers have faced challenges as they continued construction work during the coronavirus pandemic on the plant, which will now cost about 50% more than first estimated.

The plant continues to target up to 4,000 new jobs and has hired approximately 600 employees to date.

"Mazda and Toyota’s increased commitment to the development of this manufacturing plant reiterates their belief in the future of manufacturing in America and the potential for the state of Alabama to be an economic leader in the wake of unprecedented economic change," Alabama Governor Kay Ivey said in a statement.

In September, President Donald Trump and Japanese Prime Minister Shinzo Abe signed a limited trade deal that cuts tariffs on US farm goods, Japanese machine tools and other products but delayed the question of auto imports for future talks.

Trump threatened hikes but did not raise current auto tariffs of 2.5% on passenger vehicles and 25% on pickup trucks.

Japan exported 1.7 million vehicles last year to the United States, making up about 10% of US vehicle sales.