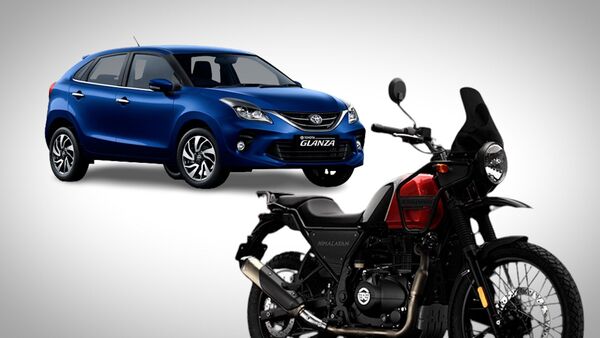 Toyota Motor and Royal Enfield are two of the key manufacturers who will be launching their new products in India next week. While Toyota will drive in the 2022 Glanza hatchback, Royal Enfield will launch the Scram 411 motorcycle in the country.

Here is a quick look at what the new car and bike may offer.

Toyota Kirloskar Motor will launch the facelift version of the Glanza premium hatchback on March 15. The hatchback, which is basically a rebadged version of the recently-launched Maruti Suzuki Baleno, will be loaded with features. Toyota has already started to take bookings for the Glanza ahead of launch next week.

Glanza will be powered by the same K-Series engine used in Baleno with a power output of 89 PS. The engine is likely to be mated to both Manual as well as Automatic Transmissions.

Toyota will pack Glanza with some of the features introduced in Baleno, such as a head-up display, 360-degree camera and a new infotainment system with Apple CarPlay and Android Auto connectivity. Glanza will also be equipped with 6 airbags as key safety feature.

Royal Enfield is all set to launch the Scram 411 motorcycle in the country on March 15. When launched, the bike is expected to be priced at around ₹1.75 lakh (ex-showroom).

The motorcycle is expected to be a toned-down version of the Himalayan and thus is likely to come with a different set of equipment to make it more cruising friendly.