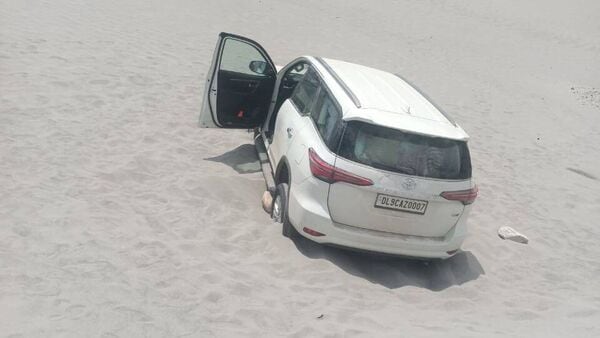 The Leh Police has fined a tourist vehicle that drove on the restricted sand dunes in Hunder in Nubra Valley in the Ladakh region. The officials booked a couple from Jaipur and a bond of amount ₹50,000 was also taken from them. The tourists drove a Toyota Fortuner SUV over the sand dunes. The landscape is famous for its cold desert.

The officials posted two pictures of the SUV on their official Facebook page. Along with the pictures of the car on the sand dunes, the post described, “One tourist vehicle was found violating the SDM Nubra's direction not to drive cars over sand dunes in Hunder. The couple from Jaipur were booked as per law and a bond of Rs50,000 was taken from them. District police Leh requests tourists not to ply vehicles on sand dunes as you damage the natural landscape and violate the prohibitory orders." The Toyota SUV had a license plate of Delhi.

The Leh Police's post garnered over 200 likes and was shared more than 100 times. Many applauded the officials for strictly handling the situation. While a few criticised the tourists for their civic sense, many praised the team of police. While one said stated good job done by the officials, another exclaimed by saying hats off.

Nubra Valley is located a few hours to the north of Leh. This is the place where the Shyok and Siachen rivers meet. The Nubra Valley separates the Ladakh region from the Karakoram range and the Siachen glacier.

Earlier, a video of tourists driving an Audi through the Pangong Lake while two individuals stood out of the sunroof went viral. The video also showed a table with bottles of alcohol and chairs laid beside the lake. The car had a license plate from Haryana.