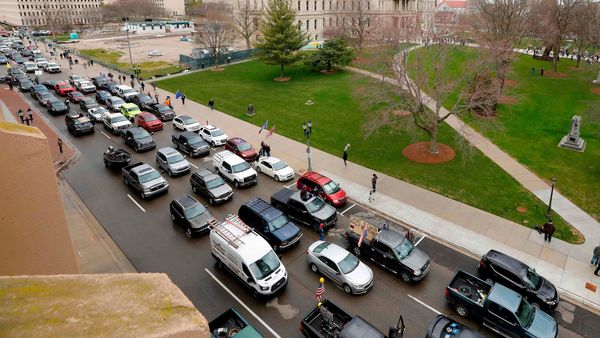 People in their vehicles protest against excessive quarantine orders from Michigan Governor Gretchen Whitmer around the Michigan State Capitol in Lansing, Michigan on April 15, 2020.

Thousands of flag-waving, honking protesters drove past the Michigan Capitol on Wednesday to show their displeasure with Gov. Gretchen Whitmer’s orders to keep people at home and businesses locked during the coronavirus outbreak.

As snow fell, others got out of their vehicles and raised signs, one of which read, “Gov. Whitmer We Are Not Prisoners." Another said, “Michigander Against Gretchens Abuses."

The “Operation Gridlock" protest was organized by the Michigan Conservative Coalition. The ripples were widely felt: Traffic was barely moving for miles in some areas of Lansing.

“This arbitrary blanket spread of shutting down businesses, about putting all of these workers out of business, is just a disaster. It’s an economic disaster for Michigan," coalition member Meshawn Maddock said. “And people are sick and tired of it."

Whitmer, a Democrat, extended a stay-home order through April 30 and has shut down schools and businesses deemed non-essential. The governor acknowledged the pain but said the restrictions were necessary to stop the spread of the coronavirus, which causes a respiratory illness that has killed more than 1,900 Michigan residents and overwhelmed hospitals in the Detroit area.

Whitmer said she was “really disappointed" to see protesters close together without masks.

“I saw someone handing out candy to little kids barehanded," the governor told reporters. “People are flying the Confederate flag, and untold numbers who gassed up on the way here or grabbed a bite on the way home. We know that this rally endangered people. This kind of activity will put more people at risk and, sadly, it could prolong the amount of time we have to be in this posture."

During the rally, Republican House Speaker Lee Chatfield, who has urged Whitmer to amend her orders, waved an American flag from a window at his Capitol office.

The protest drew an estimated 3,000 to 4,000 people, about 150 of whom demonstrated on the Capitol steps or main lawn, said Michigan State Police spokeswoman Shanon Banner, who said demonstrators were peaceful. There was an arrest when one protester assaulted another. Police did not ticket anyone for violations of the governor's orders.

“The majority of demonstrators remained in their vehicles, and most of those who were on foot were practicing social distancing," Banner said.

Four sheriffs in the northwestern Lower Peninsula called Whitmer’s orders a “vague framework of emergency laws" that are frustrating citizens. Leelanau County Sheriff Mike Borkovich said people don’t understand why they can’t take a child fishing in a motorboat but they can use a kayak.

“We’re trying to keep the peace with people. ... The economy is coming apart in northern Michigan. People are upset," Borkovich told The Associated Press. “People are frantic to get back to work. They have been very edgy."