This crash cost millions! Three Ferrari cars slam into each other. Watch here

The three Ferraris were returning from the annual Supercar Show hosted by CF Charities in Philadelphia.The crashed vehicles included a red Ferrari 488 Pista, a black Ferrari 458 Italia and another black Ferrari 488 GTB.
By : HT Auto Desk
| Updated on: 16 Jun 2021, 01:03 PM 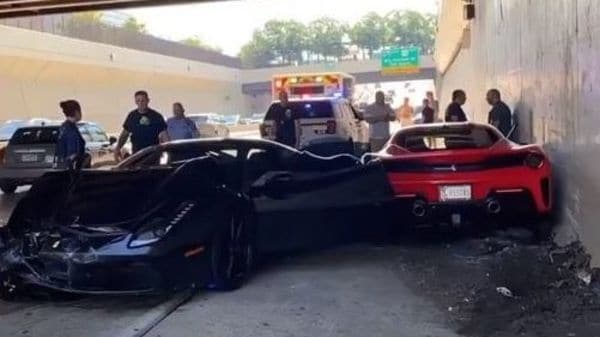 Looking at three Ferrari supercars worth millions together can make a petrol head's day but it could turn out to be a nightmare instead when the Ferraris are all wrecked and damaged. In a horrific incident recently, three Ferrari super cars crashed into one another on a highway in US' Philadelphia.

The incident took place when the three mid-engined super cars were returning from the annual Supercar Show hosted by CF Charities in Philadelphia, CarScoops reported. The event saw hundreds of performance cars making stops at one stage for car enthusiasts.

A footage of the crash was captured by the camera of another supercar, reportedly a McLaren 600LT, following the three Ferraris on the highway. The video shows a black Ferrari 488 GTB speeding on the open lane ahead of it. All of a sudden, two more Ferraris come into the view of the filming car while the black Ferrari approaches them in quite speed.

The black 488 GTB, instead of applying brakes or slowing down, swerves into the middle lane, hoping to make its way through. But, unfortunately, its tail gets kicked and slams into a red Ferrari 488 Pista before bouncing off its side and hitting a black Ferrari 458 Italia. Soon after, all three Ferraris come to a halt and form a bunch of wrecked super cars.

Soon after the crash, police officers arrive at the spot and block a part of the highway while the three damaged Ferraris lie under an overpass of the highway. The vehicles seem to have sustained quite a bit of damage. In what is visible in the footage, one of the black Ferrari's bumper seems completely damaged while a side door seems to have loosened. The repair of the vehicles will surely cost a lot.