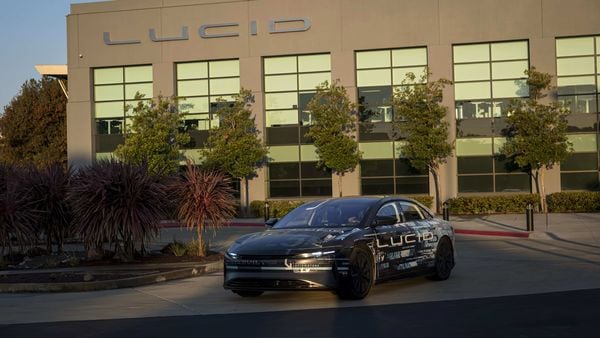 The Lucid Air prototype electric vehicle, manufactured by Lucid Motors Inc., is displayed outside the company's headquarters in Newark, California.

Electric vehicle startup Lucid Motors, which aims to begin selling its first luxury model, the Lucid Air, in early 2021, said on Tuesday that the new sedan is the first to achieve a 500-mile driving range.

The Lucid Air has an estimated range of 517 miles (832 km), as verified in independent testing, Lucid said.

Tesla in June said its new Model S Long Range Plus is the first vehicle certified by the US Environmental Protection Agency to have an estimated driving range of more than 400 miles.

The Lucid Air will be followed by an SUV, built in early 2023 on the same vehicle platform, said Rawlinson, who is the former chief engineer on the Model S, according to his LinkedIn profile.

Lucid is based in Newark, California, on the southeastern side of Silicon Valley, not far from Tesla's Fremont factory.

It was funded initially by Chinese and Silicon Valley venture investors, with additional funding from state-owned Chinese auto maker BAIC Motor and LeEco, a Chinese technology company controlled by the founder of another electric vehicle startup, Faraday Future, according to investor website PitchBook.

To help fund construction of a U.S. assembly plant in Casa Grande, Arizona, Lucid was boosted by a $1 billion investment in September 2018 by Saudi Arabia's Public Investment Fund.

The plant initially will have an annual capacity of 34,000 vehicles, building toward 360,000 about seven years later, Rawlinson said.