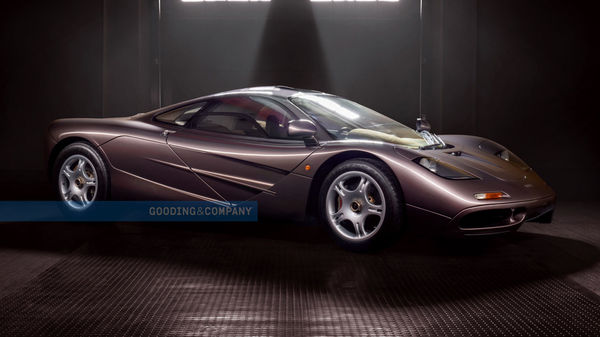 A 1995 Mclaren F1 was auctioned recently and it broke the record for the most expensive road-going car. The car was sold for an astounding amount of $20,465,000 which is approximately around ₹151 crores. It was sold at the Gooding & Company’s Pebble Beach Auction.

A report by Carscoops mentioned that the Mclaren F1 car was presented by the Gooding & Company two months ago and the estimated value of the car stood at more than $ 15 million. However, the selling price has exceeded expected price by a significant margin. It's a high chance that the distinctive properties of this 1995 model may have pushed its price. This model with chassis number 29 is the only one painted in Creighton Brown combined with Light Tan. Its three-seater cabin also features dark brown leather upholstery. This car has been driven for less than 390 km since it left the factory in 1995 hence retaining the original Goodyear Eagle F1 tyres.

The report also said that the supercar belonged to a Japanese collector and featured a wide range of original accessories. These accessories include the service book, a titanium tool kit, the owner’s manual, a custom luggage set, a very special TAG Heuer watch, the Driving Ambition book available in every new F1 while leaving the factory and a FACOM tool chest. The company built 106 units of this car with 64 of them in the original road car specification. These were manufactured between 1992 and 1998.

The McLaren F1 was designed by Gordon Murray and it came with a mid-mounted naturally-aspirated 6.1-litre V12 engine that generated power of 618 hp and peak torque of 650 Nm. The power was transmitted to the rear wheels with a help of a six-speed manual gearbox. The body's material was composed of carbon fibre, kevlar, titanium, and even gold. The car weighed around 1,240 kg. Its efficient aerodynamic design enabled it to become a performance-oriented car with a top speed of 386.4 kmph. The report also stated that it remains the fastest naturally aspirated production car to this date.