The coronavirus pandemic has upended Thai transport businesses, leaving many drivers and owners struggling to make ends meet.Tuk-tuk motorised rickshaws, tour buses and boats are only gathering dust, even during the Lunar New Year, which normally brings influx of visitors.
By : Reuters
| Updated on: 10 Feb 2021, 17:31 PM

Tuk-tuks that used to transport tourists around the city are seen idle due to travel bans and border closures from the global coronavirus disease (COVID-19) outbreak in a parking lot in downtown Bangkok, Thailand February 3, 2021. Picture taken with a drone on February 3, 2021. REUTERS/Jorge Silva

Parked in rows with many gathering dust and cobwebs, hundreds of "tuk tuk" motorised rickshaws, tour buses and boats lie silent across the Thai capital of Bangkok, after suffering a twin blow from the coronavirus pandemic and a lack of foreign tourists.

Celebrations of the Lunar New Year, which begins on Friday, normally bring a spike in spending and travel among Thais and an influx of visitors from China and elsewhere in Asia.

But the pandemic has upended Thai transport businesses, leaving many drivers and owners struggling to make ends meet, while a survey predicted Lunar New Year spending would suffer its sharpest fall in 13 years.

"These tuk tuks have been parked for a year...you can see them all covered with dust," said garage owner Kraisak Kulkiatprasert, who now rents out fewer than 10 vehicles a day, despite having slashed rentals, versus more than 100 earlier.

"I will monitor the situation for another year," he added. "If it doesn't get better, I will have to shut down."

Campon Taikae, a 50-year-old tuk tuk driver, said he had earned only 50 baht ($1.70) after driving for hours a day earlier, but felt he had no chance of finding another job.

In another part of Bangkok, tour buses are parked in long lines, devoid of their tourist passengers. 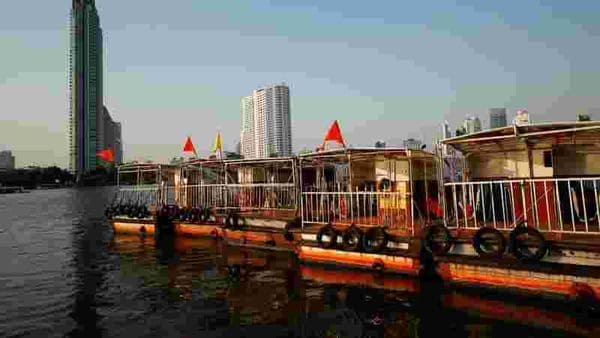 "Before the Covid pandemic, I've never been short of work," said driver Tossaporn Rakratchakarn, as he cleaned his vehicle's dust-laden windshield.

"I usually drop tourists off and pick another group up. It's been a year now and there's been no movement at all," added Tossaporn, who had even returned to his home village at one point, to look after a fishpond.

Wasuchet Sophonsathien, president of the Thai Transportation Operators Association, said only about a tenth of Thailand's 40,000 tour buses were still operating.

The story is the same for many tour boats and ferries.

Things were completely different from the days in the past when passengers packed his vessel, said Mani Hogkhontod, a 54-year-old boat driver.

"I have been thinking about finding a new job, but I am worried that I have to start from zero, because of my work experience and age," he said.

Thailand's tally of infections stands at 23,903, with 80 deaths, as this week's daily cases rank among the lowest reported since the southeast Asian nation's latest and biggest outbreak emerged in mid-December.