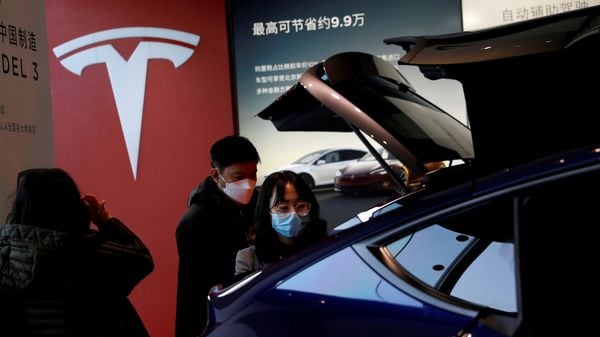 Tesla decided to develop a database that Tesla owners would be able to use to access data generated by their electric cars, the first move by any carmaker in China. (File photo)

Amidst the controversies that have caused some denting inconveniences for Tesla Inc., it has been now been reported that its sales in China dropped last month. According to a report by Bloomberg, based on an agency’s data, the US electric vehicle manufacturer sold 25,845 locally made vehicles in April compared to 35,478 units in March. However, the demand for its China-made electric cars in Europe sees an increment. Around 14,174 EVs were exported from the company’s Shanghai gigafactory for the European market, said the report. It was only last year that Tesla started exporting its Made in China Model 3 sedans to Europe.

(Also read: Tesla puts plan to buy land in China on hold amidst tensions between China-US)

Tesla has been navigating through some choppy waters in China since March after its electric vehicles were banned from entering military complexes and housing compounds on a suspicion of spying and collecting sensitive data with help of the cameras built onboard. To clarify this Tesla CEO Elon Musk went on record to state that the company would never use a vehicle’s technology for spying, and would be closed down if it did. The brand also decided to develop a database that Tesla owners would be able to use to access data generated by their electric cars, the first move by any carmaker in China.

The electric carmaker also faced some serious trolling on Chinese social media after a woman protested against the company by standing upon a Tesla model and said her Tesla car had faulty brakes, in the recently concluded Shanghai Auto Show. As per the latest report, the woman has also sued Tesla for RMB 50,000 (around ₹5.70 lakh) for causing mental anguish and emotional distress.

The fatal accident in Texas too brought Tesla’s much-raved autopilot under some serious scrutiny. Recently in a series of record that was released by the California Department of Motor Vehicles, it has been said by one of Tesla Inc.’s engineers that the company’s CEO has overstated the capability of the autopilot feature.