Tesla electric vehicles had come under investigation for allowing in-car gaming while on the move.Many pointed to this as a blatant safety risk.
By : HT Auto Desk
| Updated on: 24 Dec 2021, 12:39 PM 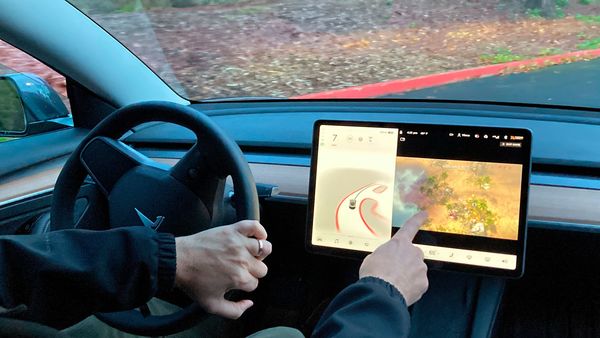 Tesla will reportedly issue a software update which would restrict in-car gaming when its electric vehicles are in motion. This comes after Tesla vehicles came under the scrutiny of the National Highway Traffic Safety Administration (NHTSA) in the US which had received complaints pointing to possible risks that can emerge from gaming while a car is moving.

Associated Press on Friday reported that Tesla will roll out a software which would now allow for the ‘Passenger Play’ function to be active only when an electric vehicle is stationery. ""Following the opening of a preliminary evaluation of Tesla's 'Passenger Play,' Tesla informed the agency that it is changing the functionality of this feature," a spokesperson for NHTSA was quoted as saying in the report. "In a new software update, 'Passenger Play' will now be locked and unusable when the vehicle is in motion."

As many as 580,000 Tesla vehicles had come under the scrutiny of NHTSA which sought to investigate the risk element involved in having gaming feature enabled in Tesla cars while these are moving. Tesla CEO Elon Musk has been very vocal in his support for autonomous driving technology and has said it allows motorists to be safer because it removes chances of human error while also allowing occupants to indulge with features such as video conferencing and gaming.

But not everyone has bought the idea yet.

Tesla Model 3, S, X and Y have been under the safety lens of NHTSA after complaints were made about giving the option to a driver to play when the vehicle is in autonomous mode. Even  if occupants are playing when the car is in motion, there is a chance that the driver could get distracted.

The reported rollback means the gaming functionality would only be active when the Tesla vehicle is in Park Mode.